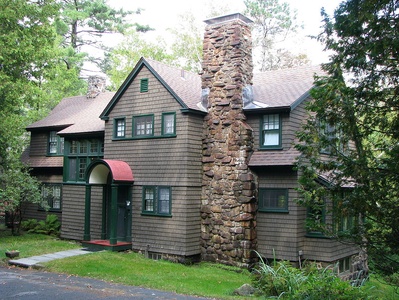 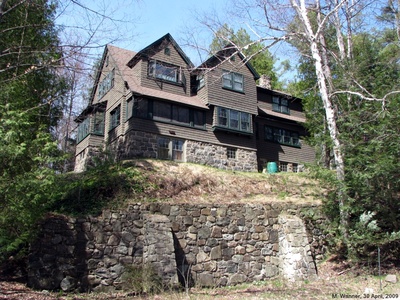 History: Built for Dr. Albert Henry Allen, it includes an intact cure porch on the first floor. The house was leased to a number of tenants from October 23, 1910 to December 6, 1915. A 1917 health survey lists the house as containing tuberculous patients, and the 1925 state census lists residents Dr. C. W. Norton, Mrs. Margaret Churchill, "Boarding mistress", and Mr. Alfred Benson, "Patient". It does not appear to have been registered as a private sanatorium.

On August 14, 1919, the Enterprise reported, "In an automobile accident near AuSable Forks at midnight last night, Edward Johnson, Paschal Loritson and Miss Mary Mitchell of Saranac Lake were instantly killed and Miss Emma Michell of Saranac Lake was terribly injured and will probably die. . . . Miss Mary Mitchell was apparently about 21 years old and was employed at the St. Regis Hotel as a waitress. Her sister Emma was probably about three years older and was employed as a housekeeper for Dr. C. W. Norton of 22 Catherine Street." Reprised by Howard Riley in his column in the Adirondack Daily Enterprise, September 17, 2011.

Dr. Allen — and later his estate — owned the property until 1935, when it was sold to Dr. Daniel M. and Katherine Rutledge Brumfiel. Dr. Brumfiel died in August, 1958, and his widow, who volunteered with the Village Improvement Society, lived in the house until 1963, when she sold it. 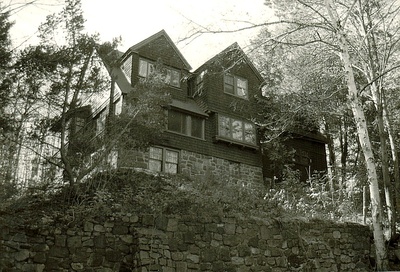 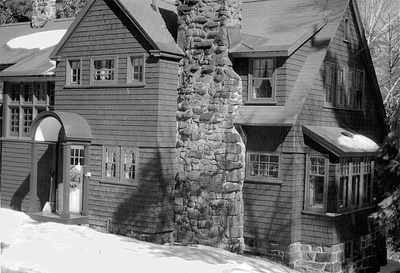 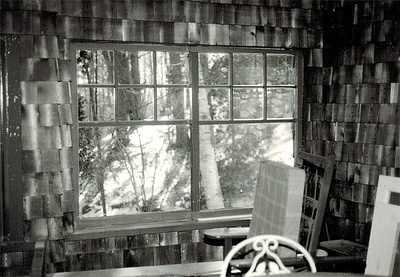 2010-04-29 17:51:27   I grew up on Woodycrest Rd. Mrs Brumfield (sp?) lived in the Allen Cottage. It was a dark brown with green trim then. There was a lovely wooden stairway on the right side, looking at the cottage from Woodycrest, that went down to Catherine St. If you were lucky you could sneak up or down the stairway and not get caught by Mrs. Brumfeild. She had a beautiful garden on either side of the stairway. —96.236.10.244

2010-04-29 20:30:07   I live here now! There is a stone stairway part way down and I had heard there was a wooden stairway beyond that, down to the street (and that the mailbox was down on Catherine Street), but don't know what the wooden stairs looked like. The remnants of the garden are still there — I'm waiting for the red and white trillium to come up. And the little white flowers of the bloodroot are blooming at the bottom of the wall. I'd love to hear more of your memories. —MaryHotaling