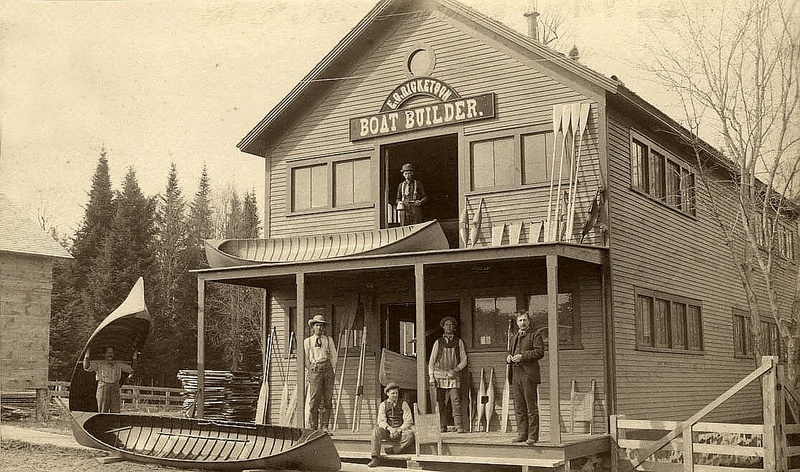 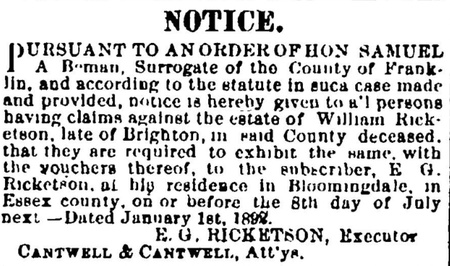 It appears that E.G. Ricetson was a son of William Ricketson who died c. 1890
Franklin Gazette, January 15, 1892
Elbridge Gerry Ricketson, known as Elbert and Albert was a guide and boatbuilder in Bloomingdale.  He is listed as a boat-builder in the Report of the Commissioners of Fisheries of the State of New York, 1886 (see Guides).   He is buried in Brighton, in the Mountain View Cemetery. (A news account indicated that he was buried in the Ricketson cemetery, but we have found no mention of a cemetery so named.  It is possible that it was so called at one time.)

An Albert Ricketson is listed one of the guides photographed by A. W. Durkee at Paul Smith's boathouse on October 2, 1885.

The funeral of Elbridge G. Ricketson was held Saturday afternoon from his late home on Brinkerhoff street, the Rev. Albert Gale, rector of Trinity church officiating. The remains were then conveyed to his former home in the town of Brighton in Franklin county where the interment took place in the Ricketson cemetery.

Mrs.  Charles  B.  Forbes,  of New  Orleans,  is  expected  to  arrive here  Saturday  to  attend the funeral  of her  father, Elbridge G. Ricketson,  of  this  city. Mrs. Forbes was formerly Miss  Ermina Ricketson, of  this city.