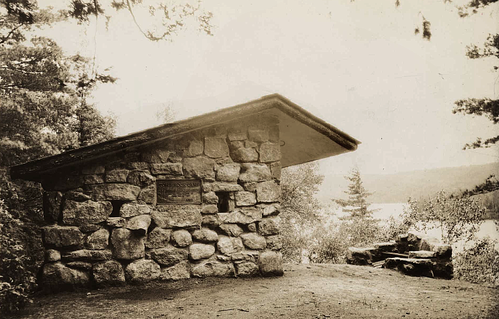 Tom's Rock, Eagle Island, Lower Saranac Lake, July 1926
New York State ArchivesEagle Island is a 64-acre island in northern Lower Saranac Lake. Until the practice was ended in 1975, there were six Platform Tent sites on the island, and two open sites. As a part of the Saranac Lake Islands Campground there are now five campsites.

There is also an Eagle Island in Upper Saranac Lake.

The Mason party, from Brooklyn, are expected in this week, and will occupy their cottage at the head of Eagle Island, which is the largest island in the Lower Saranac Lake.

This is the time of year when the woods are most delightful. The leaves of the trees which border the lakes are just beginning to turn. Eagle Island, on the Lower Saranac, is especially gorgeous, and in fact the trip of the lakes affords one view more brilliant than another.

"Years, ago, I camped in a concrete lean-to located on a cliff1 on an island in Lake Saranac. I recall that the lean-to had a plaque on the wall on which was inscribed a rather beautiful quotation. Time has erased the words from my memory. I wonder if you would he good enough to send me the text of that quotation together with the name of the author thereof."

The season of primitive camping for the North Country Girl Scouts ended with a week of canoe camp on Eagle Island In Lower Saranac Lake, August 10 through 16.

The Senior Scouts, got off to a rugged start by pitching camp in the rain. That nothing essential got wet proved their skill as campers. Even the first damp meal on a rock overlooking the lake failed to dampen their spirits. The Sunday vesper campfire set the keynote for the -week with emphasis on the spiritual, as well as living together close to the natural beauties, of lake, blue sky, pines and distant mountains.

Pup tents furnished cover with one set aside for kitchen supplies. Early Monday morning the girls lashed together a handy work table between the chimney fireplace and the cook tent to speed production and ease pressure on creaking backs. Nails for pots and pans and rocks for shelves made an efficient work center. A dining center on an elevation close to the lake and an altar campfire circle were set up. The sleeping areas had been established levels carpeted with pine needles up the hill. These soon became known as the attic, upstairs, downstairs, and the basement on the lake's edge where all clean-up took place.

With housekeeping chores equally divided, the girls turned their attention to perfecting canoeing skills and swimming.

The Scouts from Tupper Lake, Long Lake, Saranac, Chazy and Plattsburgh, plus their counselors from Buffalo and Rochester, were a singing group. Guests from nearby camp units completed the evening campfire circle and added to the harmony. Old favorites, rounds, spirituals and Girl, Scout songs made the forests resound with haunting melodies and "memories that linger, constant and true" to charm the winter months and pave the way to next Summer's camping.