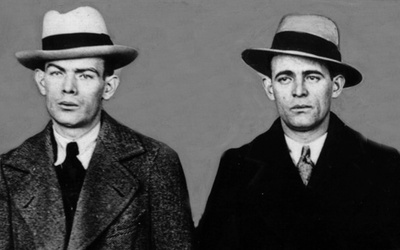 A brick at the Saranac laboratory has been dedicated in the name of Eddie Diamond by Historic Saranac Lake.Born: June 9, 1902

Eddie Diamond was the brother of the notorious gangster, Jack "Legs" Diamond. He died of tuberculosis, in Saranac Lake.

From the Adirondack Daily Enterprise, February 6, 1985

He had already earned the title "Clay Pigeon of the Underworld" having been riddled with shotgun pellets on seven separate occasions, the most slugs his slender body had ever absorbed at one time was 81 during a shootout at Cairo, N.Y.

It was accepted as inevitable that Legs would die "by the sword" as he had lived that way all his young life. It was just a matter of "when?"

Enemies from both sides of the law had him continually in focus, and with guns cocked whenever and wherever he was spotted.

His gangland cronies depended upon his masterful handling of the Prohibition intricacies. His equation for success was 200 percent profit for 100 proof booze!

When FDR as governor launched an all out war on the colorful felon the Volstead authorities catalogued his liquid assets at $10 million dollars stored in widely scattered warehouses.

If illicit suppliers leaned too heavily on him, he paid his debts in lead. He was hated, feared, admired and generally targeted for extinction.

Legs had one soft spot in his heart. He loved his brother Eddie and would have sacrificed every nickel he owned to bring him back to health. Tuberculosis had ravaged Eddie, who was not nearly as tough and durable as Legs.

Jack sent his brother to various western sanatoria to cure but with little success or improvement recorded. He ordered Eddie to Colorado on one occasion and belatedly found out that hit men were setting him up as a means of vengeance against Legs, who had angered some top professionals including Arnold Rothstein. Legs quickly put his own plan in motion calling in some regional IOUs. When the smoke had cleared five gangland victims were laid out in the Denver morgue. None of them was Eddie.

Jack was familiar with all convenient Prohibition routes between New York City, Albany and Montreal. The bootleg arteries ran close to Saranac Lake. The community was widely recognized as a tuberculosis haven and the prevalent Trudeau legends indicated that cures were attainable at high attitudes.

With the double worry of Eddie's failing health and the Colorado experience, Legs wanted him closer to home where he could keep an eye on things.

Since the name "Trudeau" signified progress in halting the dreaded white plague, Jack put Eddie under the care of Dr. Francis B. Trudeau with the admonition that his brother should have the very best medical expertise possible and that expense was no object.

From time to time, Legs would be reported in the village disguised as a heavily-veiled woman or wearing the habit of a nun. Scarves were also worn around the face to protect from the cold.

His favorite hotel was the Riverside Inn, a five-minute taxi ride to No. 6 Shepard Avenue, the "Hemorrhage Hill" section where a very weakened Eddie was drifting even closer to death's door.

The report also stated that Eddie had been suffering, from pulmonary tuberculosis for two years and nine months, and that the disease had finally spread to his intestinal tract. It was listed as a contributing cause of death.

There was no autopsy. Willis Currier, a local undertaker (license- 509) prepared the body for shipment to New York City acting on orders of Charles Higgins, of 7901 4th Ave., Brooklyn.

A very special "truce" of respect was in effect among rival gangsters at the metropolitan funeral home where Eddie was laid out amid floral splendor.

Gangland's elite (gunless) hobnobbed with cops who infiltrated the mortuary rooms looking for "most wanted" suspects who might turn up at such a function.

Edward Diamond was 27 years, 6 months and 5 days old when he expired that winter night on Shepard Avenue. He left a widow, Catherine Donahue Diamond, and a son, Johnnie.

But Legs of the charmed life was to follow shortly. He was shot through the head several times by unknown assailants on Dec. 18, 1931 at about 5 o'clock in the morning as he lay drunk in bed at his Dove St. rooming house in Albany.

Perhaps stranger still and nearly as rapid was the departure of Leg's wife, Alice, who was also shot by person or persons unknown. She had been drinking coffee at her kitchen table in Brooklyn on June 30,1933, when a visitor placed a .38-calibre pistol to her temple and fired once.

Once was enough. Alice was 33 at the time of her death.

Saranac Lake occasionally has reason to treasure bits of selective notoriety and colorful anecdotes with cosmopolitan appeal. But all too often these sequences of historical fact, are being lost and are rarely recoverable in their original mint condition.