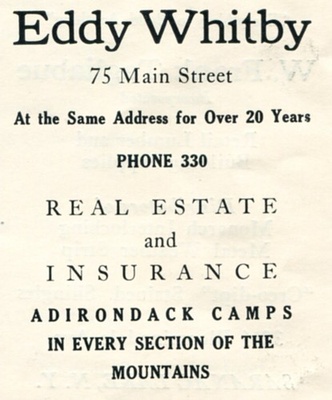 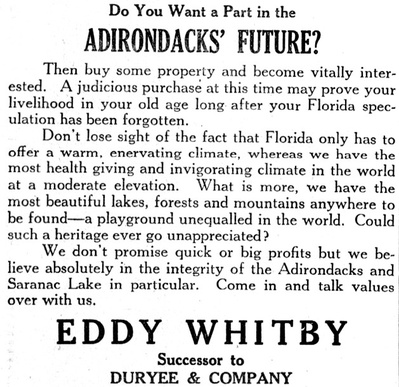 Eddy Whitby came to Saranac Lake for the cure in approximately 1898. He stayed at Conklin Cottage. Following his successful cure, Whitby was a co-founder, with George V.W. Duryee and Walter Cluett, of Duryee & Company in 1909, which specialized in renting properties to prominent or prosperous health seekers and summer vacationers. The same three men organized the Rockledge Company to build Saranac Lake's second exclusive subdivision.

Whitby had a real estate office at 72 Main Street from at least 1918 through the late 1920s. 12 It was later acquired by Clinton J. Ayres. He was elected as a village President in 1919, 3 and as a village Trustee in 1927, running as a Democrat. 4 He also served as secretary and treasurer of the Adirondack Skating Association in 1924. 5

He was a member of the Good Roads Association.

"Hoist by his own petard" is an old familiar saying and Eddy Whitby, the new village president of Saranac Lake now knows what it means. He fathered the appointment of a motorcyclist to stop speeding and violation of other motor car regulations, and it now turns out that he was the first person halted-by the new motorcycle cop for violating the speed limit. He was on his way to Lake Placid and was late. After reaching the outskirts of Saranac Lake but still within the corporation limits, he started to make time and had gone but a little way when the motorcycle officer appeared almost on him on his machine and called him down. After promising to be more careful the village president was allowed to proceed. Mr. Whitby delights in telling about it and derives much satisfaction from the officer's efficiency.

SARANAC LAKE, Sept. 21. -- Eddy Whitby, 48, former village president and trustee, died early today at his home, 108 Main street. His death was attributed to acute dilation of the heart that followed an attack of influenza in February.

Mr. Whitby was one of the village's foremost business men. Until the latter part of July he was a member of the village board, having been elected a trustee in the March election. He resigned because of illness. Since he resigned his place has not been filled. He was a Democrat.

Mr. Whitby was owner and president of Duryee & Company, founded by the late George V. Duryee, a real estate and insurance business. He loved all that was best in Adirondack life.

While village president Mr. Whitby initiated many projects of value. His ambition was the creation of a park system. He served as chairman of the park commission, created by his own activity. He held important offices in the Skating and Carnival association and was a director and officer in the chamber of commerce. He was a vestryman many years of the Church of St. Luke the Beloved Physician. He was a member of Saranac Lake Lodge 1508, B. P. O. E.

Born in Denton, Md., March 24, 1879, Mr. Whitby made his home there in earlier years and later in Baltimore. He came here 27 years ago, becoming associated in offices of Duryee & Company, of which he acquired full ownership in 1916 after the founder's death.

On Thursday, October 6 the real estate and insurance business, conducted for many years at 75 Main street, Saranac Lake, by the late Eddy Whitby under the name of Duryee & Co., passed under the control of Clinton J. Ayres, Inc., of Saranac Lake. Mr. Ayres has maintained offices for several years in the Berkeley building, Berkeley square. William H. Scopes, executor of the will of Mr. Whitby, closed negotiations for the sale of the business. Mr. Whitby died at his Saranac Lake home on September 21.

Two of the oldest business organizations in Saranac Lake are thus brought under one management. More than 25 years ago the Whitby business was organized by the late George V. W. Duryee. The Ayres agency is successor to the business established in 1885 by the 1st 0. E. Miller. Both offices have long occupied an enviable position in Adirondack real estate circles.

The new owner plans to continue the Whitby office at the present location. It will do business as the Whitby agency, Clinton J. Ayres, Inc., successor, for a period of at least a year.

One of the largest consolidations of insurance agencies in this part of the state is effected by this deal. Thirteen companies have been represented by the Whitby agency and twenty by the Ayres office.

Much comment has been caused in Adirondack real estate circles by the announcement of this consolidation.

Saranac Lake's great esteem for Eddy Whitby as a leading citizen and business man for the past quarter century was given expression in many ways today following his death early yesterday morning. All real estate and insurance offices of the village were closed this afternoon, and owners and employees planned to attend in a body the public funeral service to be held this evening in St. Luke's church, as a mark of their regard for an honored members of their profession.

The services at the church tonight will be at 7:30 o'clock, and the Rev. Elmer P. Miller, rector, will conduct the ceremony. Friends of the deceased will be welcomed. At 6:45 o'clock tonight, at the home, 108 Main Street, services will be held by Saranac Lake lodge No. 1508, B.P.O. Elks. Following the funeral services, the body will be taken to Mr. Whitby's former home, Baltimore, Md., where burial will be made in Louden Park Cemetery. The services tonight will be attended by many village officials, present and past, who were associated with Mr. Whitby when he served as village president and as village trustee. Others will be present who have worked with him as an able executive in promoting the civic welfare of the community through many unselfish activities. The church itself will mourn the loss of a rela leader. As vestryman at St. Luke's Mr. Whitby devoted himself unceasingly to the interests of this religious institution.