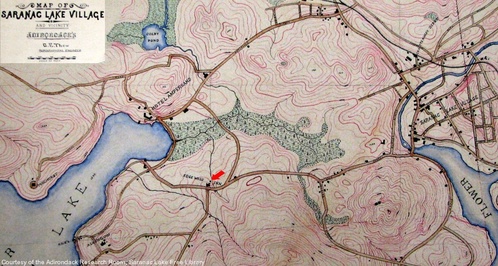 Circa 1890 Address: The Edgewood Inn burned in 1901. Its site appears to have been astride the LaPan Highway

Mr. W. L. Davids, proprietor of the Edgewood Inn, died Sunday night of consumption. Mr. Davids has lived here for the past three years and had numerous friends who mourn his death.

Edgewood Inn, a hotel property belonging to the Ampersand Company, at Saranac Lake, has been rented by W. Dewey, and will be run by him next season.

...Another favorite Saranac Lake house is the Edgewood Inn, which is to be conducted by the Dewey Brothers, as last year...

Edgewood Inn, situated about half mile from the Ampersand hotel, and owned by the Ampersand company, was totally destroyed by fire last week Tuesday night. The hotel could accommodate about 75 guests; it was insured for about $15,000. There was nobody in the house at the time and the origin of the fire is unknown. Later report says that the loss is about $8,000, including contents. Thomas Dewey had been running the place but moved on Monday of last week. He had not taken all his furniture away and his loss is quite heavy, with but little insurance. It is not believed that the house will be rebuilt.

Edgewood Inn, a hotel situated about a half mile from the Ampersand Hotel and owned by the same company, was entirely destroyed by fire on the night of Oct. 16. No one was in the house at the time, and the origin of the fire is unknown. The loss is estimated at about $10,000, partially covered by insurance. The manager of the hotel was Thomas Dewey.