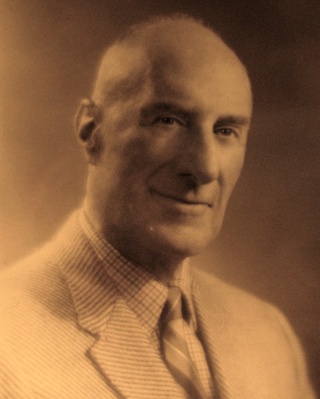 Edmond Alfred Guggenheim was a philanthropist and an heir to one of the largest family fortunes in U.S. history. He was the son of Murry Guggenheim (Daniel Guggenheim's brother) and the grandson of Meyer Guggenheim, who immigrated from Switzerland and, starting as an itinerant peddler, built an immense mining and smelting empire. Edmond Guggenheim helped supervise the family's copper holdings for nearly fifty years. He built Guggenheim Camp on Lower Saranac Lake, which he owned from 1917 to 1963. His sister was Lucille Guggenheim.

Mr. Guggenheim's philanthropy supported a number of local institutions, including:

SARANAC LAKE The death Monday of businessman-philanthropist Edmond A. Guggenheim at age 84 came as a great surprise to his many friends in the Tri-Lake Area.

He had been vacationing at his Scottsdale, Ariz., winter home, and entered the Good Samaritan Hospital there for what was described by an associate as "minor surgery" a month ago. The cause of death was laid to "post-operative complications," according to a spokesman for the Murray and Leonie Guggenheim Foundation, Mr. Guggenheim's charitable trust.

Mr. Guggenheim was born in St. Gall, Switzerland. His education, as a metallurgist, was completed in the United States at Columbia University and Yale University.

He worked from 1911 on in his field for a number of metal-processing firms, and in 1916 became associated with the firm of Murray Guggenheim's Sons, New York City.

He then became a partner of Guggenheim Bros., and, until 1923, served as head of the Guggenheim Bros. Mining and Exploration Dept., and as vice president in charge of the firm's South American interests. These interest produced the major part of the Allies' copper supply during World War I. Mr. Guggenheim served in the War as an enlistee in the Army Motor Transport Corp, stationed at Camp Meigs, Washington.

Mr. Guggenheim continued to be active in the copper business until 1961, at which time he retired as a member of the board of the Braden Copper Co. He had served at various times on the boards of Kennecott Copper Corp., Nevada Consolidated Copper Co. and Utah Copper Co.

He was appointed a Special Deputy Commissioner of Police for New York City in 1919, with charge of the Borough of the Bronx. He was active with the Police Pension and Relief Committee and the Crime Prevention Committee until resigning from these activities in 1925.

In 1929, Mr. Guggenheim was elected to the board and as a vice president of the Murray and Leonie Guggenheim Foundation and Dental Clinic. The latter provides free dental care to public and parochial school children in New York, and is the largest of its kind.

Mr. Guggenheim, in World War II, was treasurer of New York at War, Inc., an organization which, among other things, sponsored a mammoth parade on June 13, 1942 in New York City.

Mr. Guggenheim's interest in the Saranac Lake area went back to childhood years. Until recently, he maintained a camp here, now called Casa de Loa, which he made a gift of to the Diocese of Ogdensburg. There are many stories of Mr. Guggenheim's personal charities to friends and neighbors in the Tri-Lake Area, but his public charities will never be forgotten.

He was honorary chairman of the fund-raising campaign for the erection of Saranac Lake General Hospital, contributing about $700,000 to the construction funds, and the cost of the entire third floor of the hospital. The floor is named for Marron Price Guggenheim, his first wife.

He was an avid boat racer, and a many-time winner of the Adirondack Speed Boat Championships. He participated in the Gold Cup and American Speedboat Championships nationally, often placing well in these events.

Prior to his death, the Murray and Leonie Guggenheim Foundation was in the process of dissolution. The matter is in the courts, and the eventual disposition of the Foundation resources have not been made public. The Foundation, for some years, supported other charities than the Dental Clinic that bears his name.

He is survived by his third wife, Marion, and a daughter, Mrs. Natalie G. Talbert, of Honolulu, Hawaii.

The spokesman for Mr. Guggenheim’s family said that plans for a funeral were not complete at this time and would be made public as soon as they are known.

Murry Guggenheim, financier and philanthropist, who died last Wednesday at the age of 81, left $5,000,000 to the Murry and Leonie Guggenheim Foundation, it was revealed yesterday when his will was filed for probate.

In the will, drawn June 9, 1938, the senior member of Guggenheim Brothers bequeathed to his widow, Leonie Guggenheim of 998 Fifth Avenue, his household and personal effects, real property at 121 East Eighty-third Street and in Colorado, and a life interest in his residuary estate…

Edmond A. Guggenheim, son, of the Hotel Pierre, who was named sole executor, receives his father's interest in the enterprises of the firm of Guggenheim Brothers known as the Minerec enterprise, the sulphur recovery enterprise and the sewage disposal enterprise. He also receives $400,000 cash and, after the death of his mother, a life interest in one-half of her trust.

Jean E. Bonar, granddaughter, of the Hotel Pierre, succeeds to the other half of the income of the residuary trust after the death of her grandmother. If her grandmother should die before her she is to receive $250,000 of the principal of the trust when she is 21 years old. Lucille G. Bonar, daughter of Mr. Guggenheim and mother of Jean, and Natalie G. Bowden, granddaughter of the testator and daughter of Edmond A. Guggenheim, both have contingent interests in the principal of the trust for the widow…

The two Limburg camps on Lower Saranac Lake, Rock Ledge and Idle Point, will pass into the possession of Edmond Guggenheim shortly. Mr. Guggenheim, who occupied them last summer with his father, Daniel Guggenheim, leased the Floyd-Jones camp this year, while the Limburg camps have been occupied by their owner, Mrs. Richard Limburg.

Recently in Trouble for Speeding.

Edmond Alfred Guggenheim, son of Murry Guggenheim of 20 West Seventy-sixth Street, was married yesterday afternoon in the presence of a few relatives and intimate friends to Miss Marron Bertha Price in the latter’s apartment, 2 West Eighty-ninth Street, by Rabbi Joseph Silverman. Immediately after the wedding the couple started for Colorado, where young Mr. Guggenheim, who is just out of Yale, is to manage one of his father’s mines.

The bride, whose father and mother are both dead, was a daughter of the late Edward Price, and has lived with her sister. Young Mr. Guggenheim is a nephew of Daniel and Isaac Guggenheim and of Senator Simon Guggenheim of Colorado. He was in trouble with the authorities for automobile speeding two weeks ago and promised not to drive a motor in this State again.