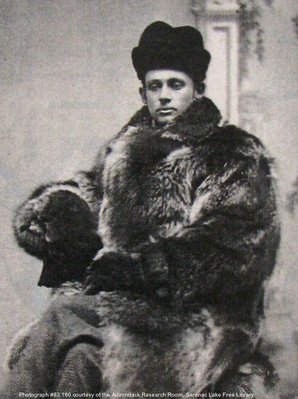 Until the 1870s, no tuberculosis patients seemed to have braved the frigid winters of the Adirondacks. The first tubercular patient credited with staying year-round in Saranac Lake was Mr. Edward C. Edgar who spent the winter of 1874 at the boarding house on Main Street run by Mrs. Nellie Vosburgh Evans, wife of Lucius "Lute" Evans, a well-known local guide. At this time, the village of Saranac Lake was little more than a saw mill, a small hotel for guides and lumbermen, a schoolhouse and perhaps a dozen guides' houses scattered over an area of an eighth of a mile. 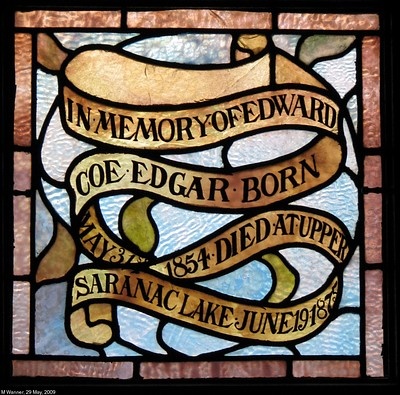 The Edward Coe Edgar window at the First Presbyterian Church of Saranac Lake From the Adirondack Daily Enterprise, March 29, 1997.

Before Trudeau Arrived, Edgar was the first TB patient

SARANAC LAKE - In the front entry of the First Presbyterian Church of Saranac Lake, over the stairs, is a small window that conveys some unique information about the history of this village.

In connection with the repair of its stained glass windows, the church historians have begun an effort to identify the individuals in whose memory they were given. This small window is dedicated: "In memory of Edward Coe Edgar. Born May 31, 1854, Died at Upper Saranac Lake June 19, 1875."

From the time of the Civil War, as the Adirondacks became a popular venue for public recreation, the idea developed that spending time in the woods also had a benefit to health.

This idea was popularized in the press, especially in W.H.H. Murray's 1869 book Adventures the Wilderness, or Camp-Life in the Adirondacks, which devoted nearly equal space to health and to recreation. Alfred Donaldson wrote that "among the guests at 'Martin's' (hotel on Lower Saranac Lake), from as early as I860, there were always a few who had tuberculosis, and went there for the relief they found. Some of these, in later years, after a summer at 'Martin's,' would spend the winter in Saranac Lake. Donaldson named seven men. These patients chose their destination themselves, as E. L. Trudeau would also do in a few years.

A brick at the Saranac laboratory has been dedicated in the name of Edward Edgar by Historic Saranac Lake.No doctors had referred them and there was no doctor here to care for them. It was the twilight of the treatment of illness by a change of climate, a method employed since Roman times.

Edward Edgar was the first tuberculosis patient to spend a winter in Saranac Lake for his health on the advice of a doctor. By the time Edgar arrived, the medical world had taken notice that some of the self-referred health-seekers had reported good results. At this time conditions were very primitive; few people could bear the harsh winter weather and the isolation — forty-two miles over unbroken roads from the nearest doctor or railroad. Most patients who came to camp in the area in summer returned home during the winters. Dr. E. L. Trudeau, the second documented patient to spend an Adirondack winter for his health on his physician's advice, stayed first at Paul Smiths in 1874-75, and then in Saranac Lake during the winter of 1875-76. Trudeau wrote:

"It was the summer of 1874 that I first met Dr. Alfred Loomis, who was in camp with a hunting party at Bay Pond. I told him that I would like to stay all winter and take my chance. He seemed to think there was no reason why I should not try it, and told me he had advised a Mr. Edgar, who was a patient of his and wanted to stay through the winter, to remain also." The good result of the winter's stay in my case, as well as in that of Mr. Edgar who stayed at Saranac Lake during the same winter I spent at Paul Smith's, drew Dr. Loomis's attention to the value of the Adirondack climate for tuberculosis patients and induced him to advise other such patients to remain through the winter."

Alfred Lebbeus Loomis, M.D. (1831-1895), a consultant in diseases of the heart and lungs, wrote a book on the physical diagnosis of chest ailments that became a classic in the profession. He held a chair in Practice of Medicine, and was the first president of the American Climatological Association.

On April 26, 1879, he published "The Adirondack Region as a Therapeutical Agent in the Treatment of Pulmonary Phthisis" in The Medical Record, advocating the benefits of Adirondack air for those in the early stages of tuberculosis and describing twenty cases, including his own and those of E. L. Trudeau and Edward Edgar.

Loomis wrote: "Not until 1873 was I able to persuade any phthisical invalid to remain during the winter. The effect of the winter climate on this invalid (Edward Edgar) showed so markedly the benefit to be derived from a winter's residence in this region, that from that time, each winter, others have been induced to remain."

Dr. Loomis clearly states that 1873 was the first year any of his patients stayed the winter, and that "in the fall of 1873, Mr. E., aged twenty, went into the lake region of the Adirondacks." In his case study Dr. Loomis describes examining Edgar in the fall of 1874, and comparing his condition to the previous year. Just as clearly, Dr. Trudeau states: "Mr. Edgar . . . stayed at Saranac Lake during the same winter I spent at Paul Smith's." From these contemporary accounts, it seems that young Mr. Edgar spent two winters in the Adirondacks and that the second winter was spent in Saranac Lake. Where he passed the first is unknown.

Edgar must have been very ill indeed to choose to spend one or two winters here, nearly alone, when he was twenty years old. About the village, Trudeau elaborated: "The two best houses were owned by "Lute" Evans, an old guide, where Mr. Edgar, Dr. Loomis's patient, boarded; and opposite was a fairly comfortable little clapboarded house owned by Reuben Reynolds, also a guide." The Evans cottage, operated by Mrs. Nellie Evans, was located on Main Street approximately where Newberry's is now [in 1997]. It was perhaps the first boarding house in Saranac Lake that accepted T.B. patients, though Donaldson stated that a patient named Dennis McMahon "spent the winter of 1875 at Ensine Miller's." Dr. Trudeau rented Reuben Reynolds' house for his own family the following winter, and moved to Mrs. Evans's for seven winters after that. It became the common pattern of life for Dr. Trudeau, and for other patients as well, to spend winters in the village and summers at hotels or camp sites in the region. Nearly a decade before Dr. Trudeau opened his Adirondack Cottage Sanitarium, the use of the village as a winter health resort was set. Saranac Lake prospered so much from this growing business that these original settlers' houses on Main Street were replaced by commercial buildings in later years.

Early the next summer, on June 19, 1875, Edward Edgar died at Upper Saranac Lake. The location suggests that he had gone to camp for the summer, perhaps at Bartlett's Carry or at a private camp. It is not known where he was buried, and his name does not appear on any of the lists of gravestones in local cemeteries compiled by the Adirondack Genealogical and Historical Society. It seems unlikely that his body was returned home, however, because of the difficulty of travel before the railroad had reached Saranac Lake. More likely he occupies a grave near Upper Saranac Lake, perhaps in a family cemetery or a churchyard where any marker has deteriorated or been lost.

The window donated in Edward Edgar's memory was installed fully 15 years after his death. Since there were Episcopal, Methodist and Roman Catholic churches in the village by that date, it seems likely that he, or the unknown donor of the window, was a member of the Presbyterian Church.

Addendum: A Mrs. Edgar made a donation to St. Luke's Episcopal Church in its early years.