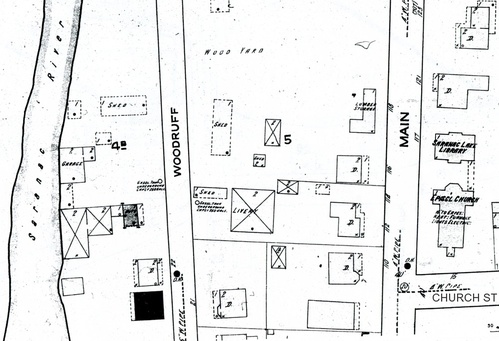 Detail from the 1916 Sanborn Map; the Livery is near the center of the map. The note to the left of the barn reads "GASOL TANK UNDERGROUND CAPCT 25O GALS"

Edward J. LaBounty ran a livery stable at 25-27 Woodruff Street/112 Main Street (the addresses are back-to-back). He was known for his wit and his storytelling ability, and for giving impromptu tours of the village. His teams were admirably harnessed and trimmed with tinkling bells. His livery stable was on Woodruff Street, and on quiet evenings, Mrs. LaBounty could be heard calling him to dinner from a considerable distance. 1

In October, 1909, he bought 110 Main Street from Warren Slater where he and his wife ran a boarding cottage until 1925, when he leased it to Aletta Werle and Jane Schneidawind. 2

His livery barn at the corner of Woodruff Street and Church Street Extension was torn down in 1954. 3

One of his early employees was George E. LaBounty.

From a piece by John J. Duquette in the Adirondack Daily Enterprise, August 7, 1987

Ed LaBounty's horse-drawn sleigh would trot by with harness bells jingling and passengers wrapped in colorful Hudson Bay blankets. Ed had his own brand of humor and loved to tell jokes. He always kept a flock of chickens in the barn and one of his favorite stories had to do with an attempt at economy by mixing sawdust with the chicken feed. "Them darn hens would lay nothing but knotholes." The recital was followed by a high pitched, toothless cackle which was funnier than the story. Ed was always a soft touch for a free ride in the sleigh as he, too, loved kids.