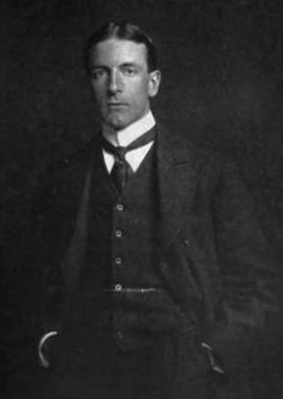 Edward Livingston Trudeau, Jr., known as Ned, was the first son of Edward Livingston Trudeau. He grew up in Saranac Lake, but was schooled at St. Paul's School, at Yale, and at the College of Physicians and Surgeons (Columbia University) in New York. He completed his residency in 1902, and then joined his father's practice. In the fall of 1903, he traveled to Paris, and on his return he became assistant to Dr. Walter B. James in New York City. 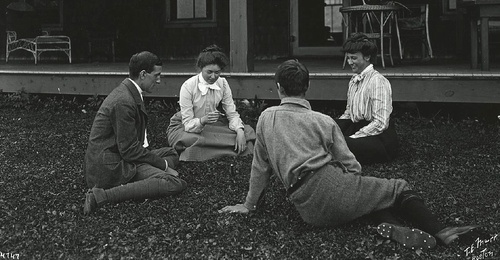 "Game of Mumbly-Peg at Nehasane" c. 1900 (detail)
Dr. E. L. (Ned) Trudeau, Jr., Frederica Vanderbilt Webb holding knife, William Seward Webb, Jr. back to photographer, Wenonah Wetmore.
Courtesy of the Adirondack Experience
He married Hazel Martyn of Chicago on December 28th, 1903. Trudeau contracted pneumonia in mid-April of 1904 and was recovering from it when an embolism resulted in his death on May 3, 1904. A daughter, Alice Livingston Trudeau, was born November 10th, 1904, at Chicago. After Ned's death, Hazel married the world renowned Irish Painter, Sir John Lavery, who used her as a model for some four hundred paintings, including one that was used on Irish banknotes from 1928 until 1975.

Ned Trudeau is buried at St. John's in the Wilderness; the funeral service was conducted by his friend, Anson Phelps Stokes, Jr. A set of three memorial windows was installed in the church in 1905 by his friends.