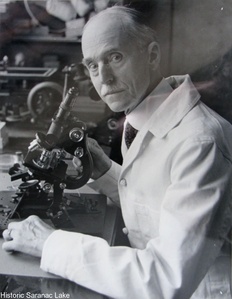 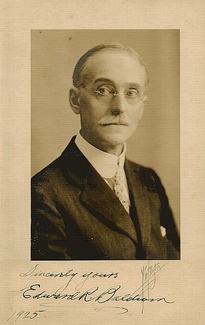 Dr. Edward Robinson Baldwin was a close friend and colleague of Dr. Edward L. Trudeau. He was graduated from Yale Medical School in 1890, and interned at Hartford Hospital. When he developed tuberculosis, he applied for entry to the Trudeau Sanatorium. Trudeau was astonished when he indicated that he knew that he had tuberculosis because he had discovered the bacillus using his microscope, as the information on how to do so was quite new. Trudeau invited him to work in his laboratory, and Baldwin and Trudeau exchanged the latest French and German medical literature on the disease. Baldwin moved into a house across the street from Trudeau's house and lab, known since as the Baldwin House. 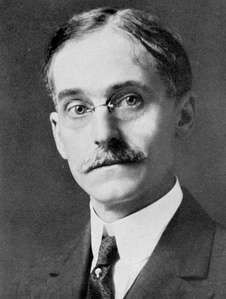 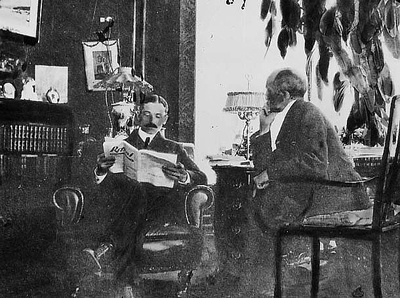 Drs. Baldwin and Trudeau, c. 1895
Courtesy of the Adirondack Experience
Baldwin was appointed Assistant, and later Director, of the new Saranac Laboratory. After Trudeau's death, he was elected chair of the executive committee of the Trudeau Sanatorium. In 1916, he started the Trudeau School of Tuberculosis; later the same year he founded the Edward Livingston Trudeau Foundation with Dr. Walter B. James, an endowment for tuberculosis research. He was also instrumental in the building of the Saranac Lake General Hospital, and served on the board of the Reception Hospital. He devised a system that allowed different treatment centers to compare success rates. 1 He 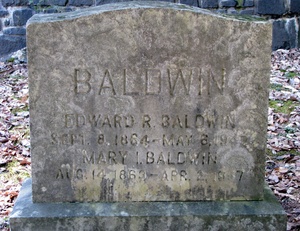 Edward R. Baldwin tombstone in the Pine Ridge Cemetery, Historic Saranac Lake Collection. served as president of the Saranac Lake Board of Health from 1899 to 1901.

He was elected president of the American Clinical and Climatological Association. He was a founder of the National Tuberculosis Association, and served as editor-in-chief of the American Review of Tuberculosis. He wrote more than 100 research papers on TB, and a number of chapters on the subject in medical texts. He was awarded the Trudeau Medal in 1927; Dartmouth College honored him with the Doctor of Science degree in 1937.