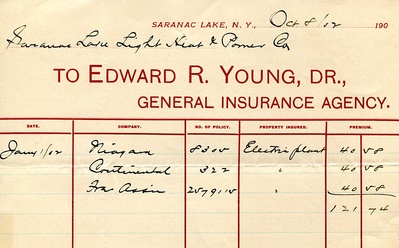 A bill for insurance on the Saranac Lake Light, Heat and Power Company, October 8, 1902 Born:

Edward R. Young came to Saranac Lake for his health in the late 1890s. He was an insurance agent who wrote policies for the Winter Carnival's Ice Palaces. In 1902 he was living at 21 Church Street, later moving to 56 Main Street. He served as clerk of the Board of Education and later as a Harrietstown Justice of the Peace. When Alfred L. Donaldson resigned as vice-president of the Adirondack National Bank, Young was appointed to the position.