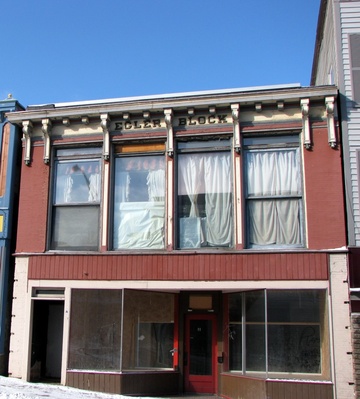 Ad for M.E. Elliott's, February, 1908 Journal of the Outdoor Life 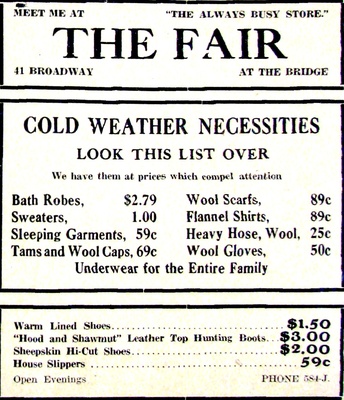 In 1908, 18 Broadway held the store of M. E. Elliott, dealer in Fruits, Vegetables, Fish and Oysters. In 1917, it held Ruser & Muller, electrical contractors.  In 1923, it held the shop of William C. Shackett, who sold "Radio Receiving Sets," along with "everything electrical."

Frederick Egler, Jr. built the building at 18 Broadway probably in 1912 (he bought the lot from Cunningham Young in December, 1911). Except for Altman's it is the only building left in the District to still prominently display the original owner's name. Just above the second-story front windows are the words "EGLER BLOCK".

In November, 1921, Elizabeth Egler sold the building to Isadore Feinberg who had come from Syracuse to Saranac Lake, c.1917, to cure. His wife, Fannie, operated a shop in the Torrence Building (41 Broadway) called The Fair of Saranac Lake, now and for many years known as The Fair Store. The Feinbergs moved the business to the Egler Block in 1935.

Prior to that, the storefront occupants were Sammy Kuntz's kosher delicatessen and restaurant (c. 1918) and, in the early 1920s, Robbins’ Restaurant. This was operated by Francis and Max Robbin who later took over the Northwoods Sanatorium at 9 Church Street (destroyed by fire c. 1974) which was the largest private sanatorium in the downtown area.

On the second floor of the Egler Block there were living quarters in the rear and Sam Matthews' law office up front. Also on the second floor, from prior to 1915 until at least 1922, was Joseph Bagdade and family. Mr. Bagdade, whom the 1915 census describes as a Turkish citizen, advertised himself as a "Parisian Taylor" who also provided a "Special Dry Cleaning" service.

For a number of years before 13 Church Street was purchased for the Jewish Community Center, Jewish High Holy Days services were held upstairs at the Egler Block.

18 Broadway is still owned by the Feinberg family, Lenora Feinberg being the present owner of both the building and The Fair Store, which carries ladies' clothing and specializes in ladies' uniforms and foundation garments.

The second story has been vacant for many years.

The two-story, wood frame Egler Block has a brick facade that is opened by four second-story floor-to-ceiling display windows which occupy nearly the building's full width. Above these is a simple cornice supported by five extremely tall, scrolled consoles and four pairs of modillions. The storefront exterior was once clad with black carrara glass, but most of this has broken and been replaced with vertical tongue and groove.