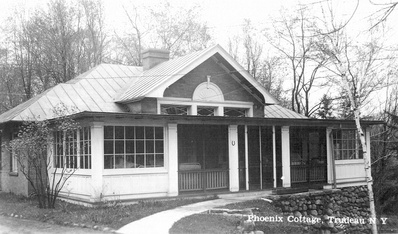 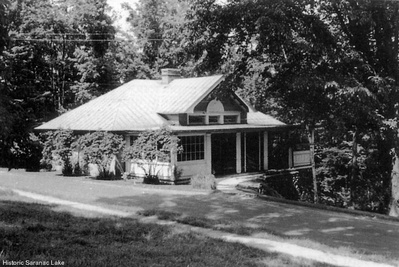 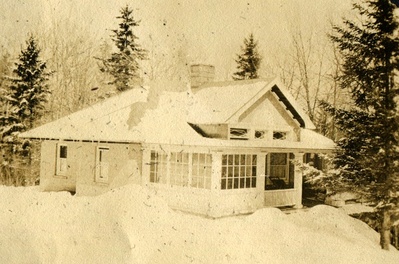 Description: Phoenix Cottage is a Colonial Revival-style cottage designed by William L. Coulter. Phoenix is built into the hillside on a randomly laid uncut cobblestone foundation. The one-story frame building is sheathed in a light yellow brick veneer siding. The cottage is surmounted by a hipped roof with asphalt shingling. Phoenix was altered after 1957 by the enclosure of both the front and rear porches with clapboard and addition of double-hung sash windows.

History: The four-patient Eleanor Phoenix Memorial Cottage is one of twenty-two buildings extant in 1993 that had been built by 1915, within the lifetime of Dr. E. L. Trudeau. Dr. Trudeau wrote of Phoenix and its near-duplicate, Robins Cottage, in one of his annual reports: "These structures are of yellow brick and stone, built in a most substantial manner, on plans which embrace all the features which long experience has shown best adapted to facilitate the treatment of patients by the open-air method in so rigorous a climate as that of the Adirondacks. They have been planned so that the beds may at will be pushed directly out on an open veranda, thus enabling the patients to continue the open-air treatment, even when confined to bed, and to sleep out at night on the sheltered veranda during the milder seasons, or when thought advisable." 1

The architect W. L. Coulter made a contract with Dr. Trudeau for "Fenix [sic] Cotg, on site of Sunshine Cottage on north end of property" on May 26, 1902. This site had been used for a cottage since at least 1898, when the Cooper cottage, "Sunshine," was moved here to make room for Anderson Cottage on its former site. 2 Sunshine was torn down in 1902 to make room for Phoenix.

The basic form of both Phoenix and Robins cottages is a one-story, eaves-front, hipped-roof cottage with a front-facing gable, which is itself fronted by a full-width porch. The gable end above the porch roof has a round-topped wooden arch detail with an exaggerated bracket in place of a keystone. The proportions of this detail were altered and three horizontal clerestory windows, important features of early cottages which were designed to bring light and air into the center living room behind the porch, were covered up when the porch roof below was built up from flat to hipped. The use of brick veneer is a very early example of that technology 3; its light creamy yellow glaze signals a change in direction at the sanatorium from the dark Queen Anne style to the light Colonial Revival.