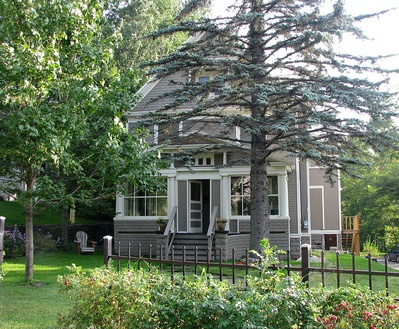 Other information: A Queen Anne style cure cottage. There is a glass enclosed veranda on the west face of the house, and a smaller, inset two-story cure porch on the south side.

The 1917 health survey indicates a tuberculous resident. By 1925, the house held two families, each headed by a TB patient. It does not appear to have been registered with the T.B. Society

The following has been adapted from an article by Bruce Harvey in the Adirondack Enterprise, February 4, 1995.

The house at 183 Broadway was built shortly before 1910, some fifteen years after Depot Street was renamed Broadway. By 1910, it had two occupants: it was the residence of A.G. Bosworth, a local merchant, and the office and residence of W.W. Ellenberger, Builders' Supplies. Elmer Mundy, a native of Ohio, came here with his wife and daughters for the tuberculosis cure around 1920. For the next three decades, the Mundys occupied this house.

It was restored for office use by the Adirondack North Country Association, a group dedicated to creating jobs and enhancing the North Country economy.

The Mundy Cottage is straightforward in plan: a basic front-gable, two-and-one-half story house. Its lone oddity is a "staggered butt" at the back, a cross section tacked onto the rear that makes it vaguely L-shaped.

The two gables on the front of the house— at the roof and the porch use patterned shingles instead of clapboards. The main roof gable has two recessed windows, with the shingled front wall curving back to meet it. The gable over the front porch also curves back, to showcase the house number. Both openings are highlighted by pairs of white columns which also support decorative cornices with curved moldings.

There are two other houses which use similar features, though without the added columns: one is the Ames Cottage, at the corner of Church and River streets; the other is the Lane Cottage at the comer of Rockledge Road and East Pine.