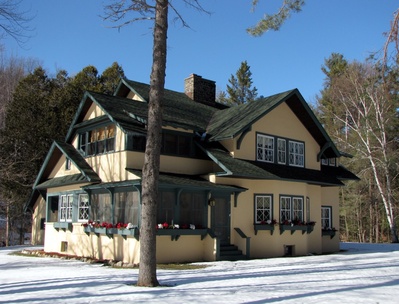 The Ellwood Wilson Cottage is a Craftsman-style residence. Land for the home was purchased in March 1902 by Helen Lyman Wilson, wife of Ellwood Wilson.

Ellwood Wilson was a civil engineer who employed Maurice Feustmann to design a home that would resemble a Swiss chalet. This was due to the fact that Wilson and his wife had been in Davos, Switzerland, for the two years prior to moving to Saranac Lake.

The home was sold to Dr. John Archibald Smith and his wife in August of 1922. Dr. Smith died August 21, 1928, and Mrs. Smith continued to own the property until she sold it in March 1957. During the Smith's ownership, the property was, for some time, rented to William W. Simpson. Nancy Connely of 146 Park Avenue is pictured in the 1940 Canaras as a graduating senior at Saranac Lake High School.

In March 1957 the home was purchased by Irving M. (Bud) and Alice Edelberg and subsequently (1991) was sold to John C. Edelberg, the son of Bud and Alice.

The property was sold by the Frosts in May of 2006 to Debra J. Smith, who named it Inglenook Cottage. In June of 2009 she sold the home to Walt and Linda Dlugolecki, the current owners.

Transcriptions from copies of two letters Irving Edelberg received from Richard Wilson, the son of the builder of Edelberg’s Park Avenue house. Bud said that Maurice Feustmann died when he himself was a small boy. He knew Grace Feustmann as “Aunt Grace.”

Yesterday I sent a letter to you enclosing some photographs which I think will be of interest. Today I received your excellent and interesting letter (it is always like that) and for which I thank you very much.

I certainly have an apology to make to you in that I had forgotten your name. When my brother-in-law in Quebec was telling me something about you a month or more ago, he either spoke, or else I got the impression that a new owner had come into the house, although something did ring a bell somewhere. I do indeed, however, remember with much pleasure the call I payed on you, and how you showed me everything. Your letter today has added much to that visit.

I also do not remember whether you told me so much about what a condition the house had fallen into when you got it. I think you did make the remark that as a young man you said you always would have like to buy it. I always remember that I liked the situation, being away from the town as much as anything. But the story of its utter decline and then renewal by you is almost astounding.

Another thing I have always carried from my boyhood time there was the number of either rather important or wealthy people who occupied those houses, — perhaps important only because I was a youngster. Both Aldrichs, T. B., the writer, and the one across from you from Boston, a Mrs. Leeds, [See Pittsburgh Post-Gazette - May 18, 1936] wife of a tin plate magnate, Chalmers, the pearl button people from Amsterdam, NY, (the daughter lives not far from here now), and a Mr. Hargou (?) down in the MacIntosh house.

Recently, that is last Spring, I spent a night in New Jersey with a boyhood friend, Watson Harding, Whose father had the photographic store opposite the Berkely Hotel. And so I could go on reminiscing.

I will be delighted to show your letter to my sister the next time I take a run up Quebec way to see her. I only wish that Saranac was not rather off in the other direction from my Vermont route up that way, because I should like to drop in again briefly.

With very kind regards, I am

P.S. I have also retained, all my life, my close friendship with Henry Baldwin over in New Hampshire.

A letter I addressed to you 148 Highland Park Ave was returned to me.

Now I have received a letter from Dr. Ipolyi giving me your name and address and herewith I am enclosing some old photos for you – taken when my father was building the house etc. He had a German architect design it, a Mr. Fuestman (or a similar name), and designed after a Swiss looking house or chalet – since we had been living in Davos, Switzerland for my mother’s health the two years previous.

I passed through Saranac something like five or more years good – stopping to call on the Ipolyi & also the occupants then of your house (forgotten their name.

I should like to do that again sometime (in summer time) tho it is a bit our of my line of travel.

With good wishes for your happiness I am