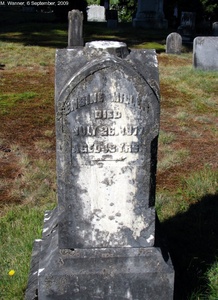 Ensine Miller was the son of Pliny H. Miller. He married Narcissa Baker, daughter of Col. Milote Baker, with whom he had three [or four?] children. When Narcissa died, he married her sister, Julia Baker, who was a beloved stepmother to his children, her nieces and nephews; this second marriage was childless.

Miller was a farmer and a lumberman; he owned two sawmills and built a gristmill, and raised hops in what is now Highland Park.

With Colonel Baker, he purchased from Gerrit Smith Lot No. 11, which spans the Saranac River near the Baker Bridge, Miller retaining the western half, where he opened the second store in Saranac Lake, across the river from the first, owned by his father-in-law. In 1852, he built a house on present day Bloomingdale Avenue, now known as the Fitz Green Halleck house. He sold the house to C. F. Norton in 1875, and built a house at 22 Bloomingdale Avenue. Bloomingdale Avenue was built by Ensine Miller across a marsh, at his own expense.

He died in 1877 at the house he had built two years previously.

Never was the little village of Saranac Lake so shocked and startled—so bereaved and saddened, as in the recent death of its highly esteemed citizen, Mr. Ensine Miller.

It was like a thunder-bolt, and the whole community feel called to mourn a loss for which, they had no preparation. It is a popular loss—a loss in which, all are in sympathy—and the question comes up from far and near, "What will the place do without him?"

It needs not to be told within a radius of many miles from his home, how large was his heart, how generous his sympathies, how open-handed his hospitality—these qualities uniting in him to form a genius of social attractiveness, and his house, always open, bore witness to the magnetic influence.

In sickness he was always ready with the best he could offer, and his ear was always open to the story of embarrassment or distress.

"With the family, so suddenly and sorely bereaved, we can only sympathize by the measurement of our own sense of loss, which now seems irreparable. But wide as the heart of this united community, and deep as its gratitude and appreciation, is the grave which receives him, and though we may
"Lay only dust's stern verity upon the dust undreaming," it is strewn thick with our tenderest remembrances and watered with our tears. —K. M. L.