Chiefly known for: Eva Long cured in Saranac Lake in the twenties. The material here has been posted by her great neice, Danielle.

2010-01-11 20:41:37   My Great Aunt Eva Daisy Long was born in Nottingham England in 1906. Her parents were Harry Long and Daisy Plummer-Long. Her brother Vincent Harry Long born 1909 is My Grandfather. She worked as a typist and sailed to America with her family in 1925 aboard the USS Ohio. It is unclear when my Aunt contracted tuberculosis. A few entries dated 1925 are from friends wishing Eva well on her trip to the states. I have included them also. They are not uploaded in order and appear in various sequences throughout the book. The entries from her time spent at Saranac Lake do not appear until 1927 and continue through 1929.

Harry and Daisy my great grandparents owned homes in Teaneck NJ and Putney Vermont. Harry Long Eva's father also ran the Crawford House a bed and breakfast in Vermont for over 10 years. Eva is pictured Left and marked by an X in the picture on the right. Note picture is marked Eva and friends taken in Saranac Lake. I believe it was taken sometime in 1928. Sadly, Eva passed away in 1931 from the disease. My grandfather also had TB but survived. I do not know if my grandfather spent any time at Saranac Lake. —DanielleSullivan 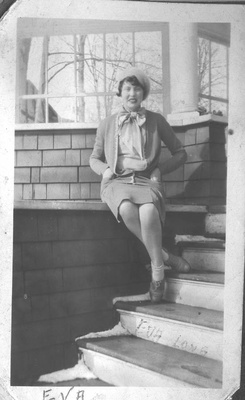 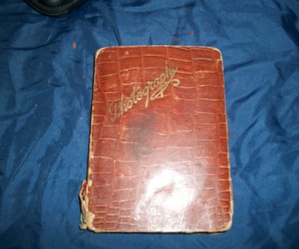 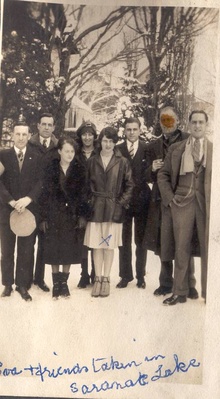 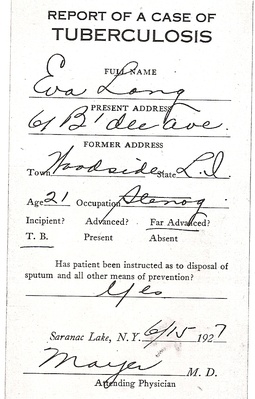 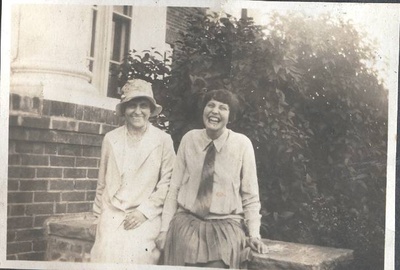 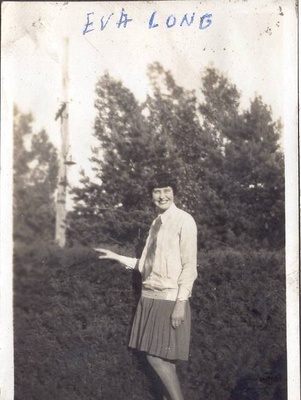 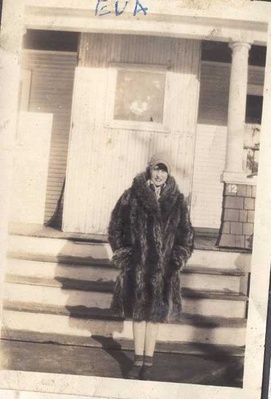 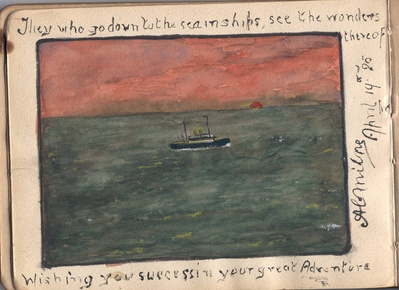 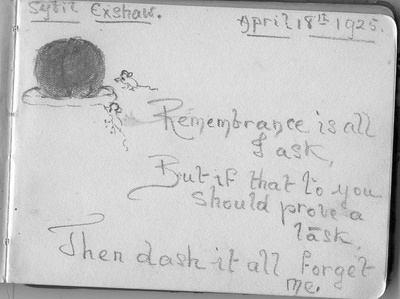 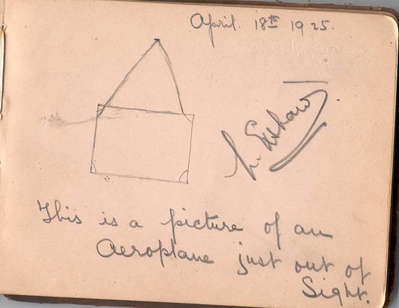 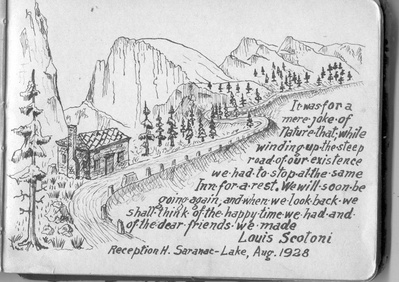 Note the "Reception H.— apparently this was written in the Reception Hospital. 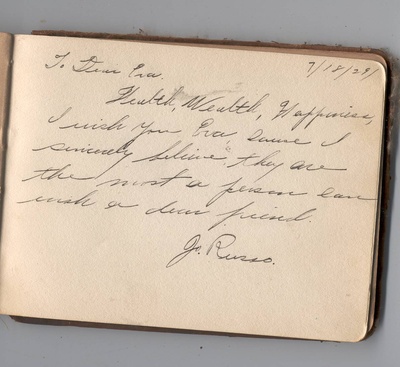 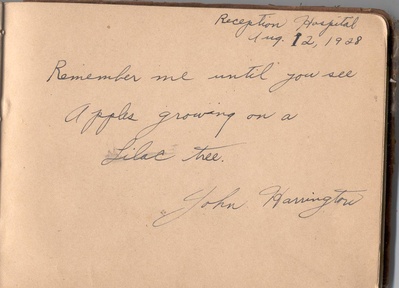 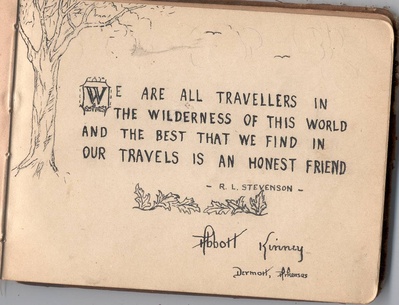 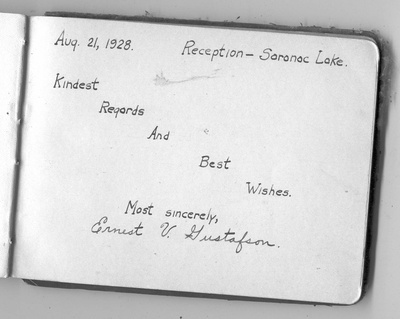 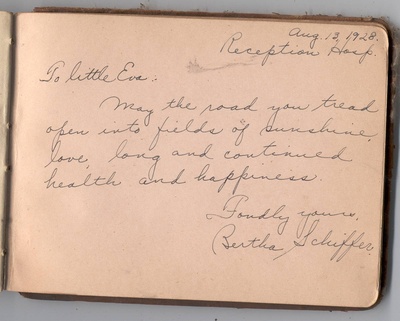 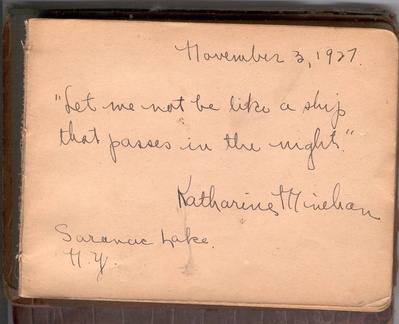 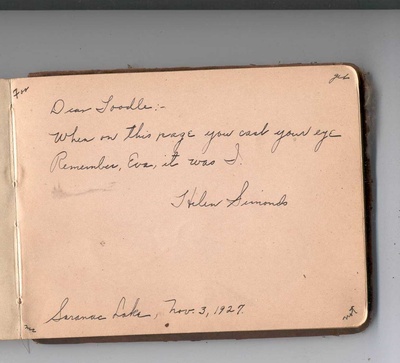 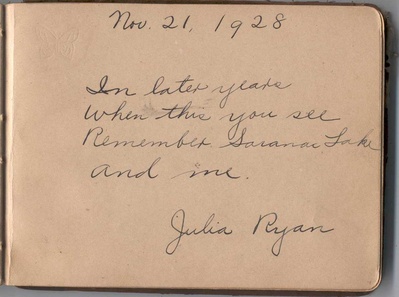 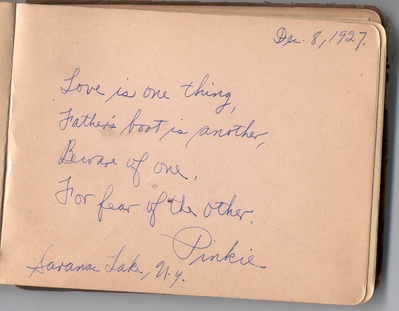 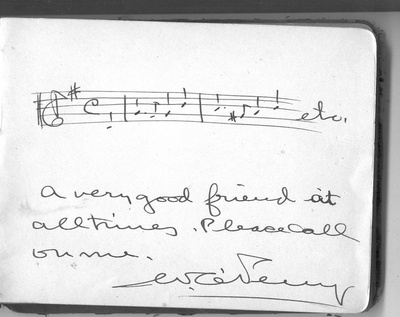 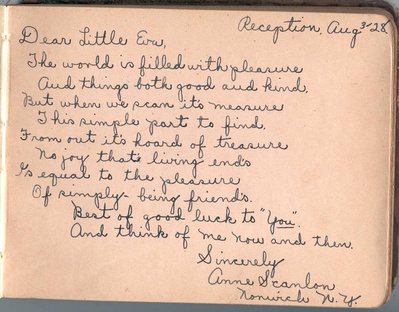 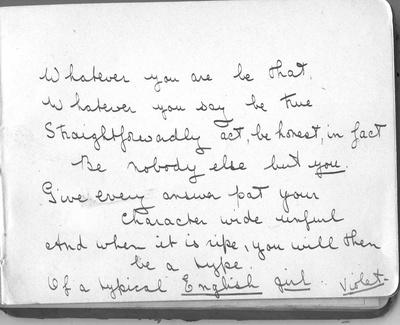 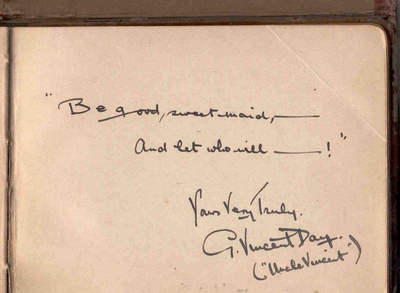 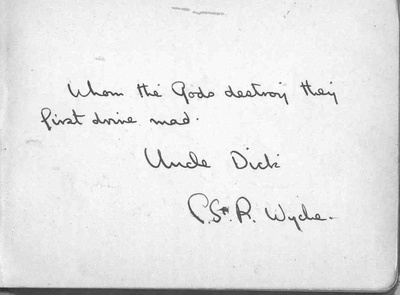 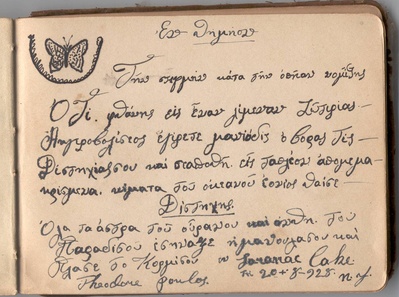 This entry appears to be written in Greek. If anyone out there can translate this it would be much appreciated. 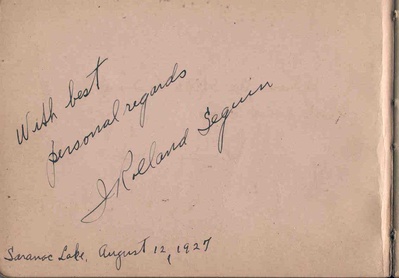 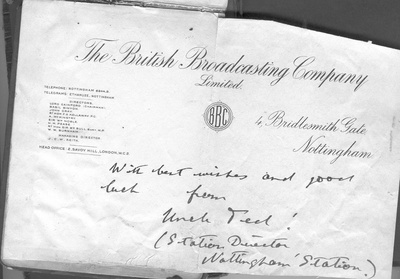 This was attached to the back part of the book. The book is also signed by another BBC member. I have been unable to figure out if this is a relative. (I was told a family member worked for BBC radio) or if someone from the BBC stayed at Saranac Lake. Note it is signed "Uncle Ted". 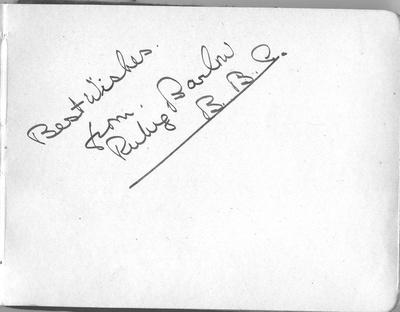 2010-01-12 11:10:16   Our historian, Mary Hotaling, thinks that the house shown in the first photo of Eva sitting on the porch is the Louis Y. Clark House. Another connection — the person who signed his name Ernest V. Gustafson could be the Verner Gustafsen who made a silver bracelet in the workshop at the Trudeau San. that we have displayed here at the lab. He made the bracelet for a lady who cured here named Eva Leah Levin Milbouer. He was a chauffeur for the Rockefellers. —Amy Catania

2010-01-12 21:49:41   I thought the same thing Marc.. That is why I added this picture. I looked back through the book tonight and found a few things I had missed the first time around. I saw this picture and it does look similar to the first photo.. Looks like the house # could be 42 or 12? —DanielleSullivan

2010-01-13 09:38:48   The new photo with two ladies sitting in front of the brick building with white column was very likely taken at Reception Hospital, later Prescott House. The two wood-shingled photos were not necessarily taken at the same house. I believe the unnumbered one is the Clark house on Park Avenue because of the very unusual angle of the porch to the stair. Searching all the other "12s", none have an angled porch like that or are as high off the ground. —MaryHotaling

2010-02-24 20:39:28   For what it's worth, that phrase of music is Auld Lang Syne. I also noticed that in the HSL wiki Saranac Lake Bibliography there is a Betsy Minehan listed as having something to do with the 1983 survey. At any rate - Same last name as Katharine's signature above. To further the BBC Mystery - There is a Ruby Barlow credited as an actress on a BBC radio broadcast of two short plays on Friday, 6 November 1925. Uncle Ted's note signs him as the station director of Nottingham, where Ms. Barlow's radio broadcast is listed as originating from. http://www.savoyhill.co.uk/invisibleplay/ http://www.savoyhill.co.uk/invisibleplay/body/appendix1925plays.html —PhillGreenland