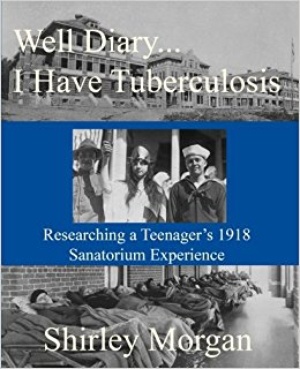 A brick has been dedicated at the
Saranac Laboratory in the memory of Evelyn Bellak Hayes by Denise Bonner and Margaret WordenBorn: August 20, 1901

Evelyn Bellak was a 16-year-old girl who was diagnosed with tuberculosis, probably late in 1917, and sent to the New York State Hospital at Ray Brook to cure. She left behind a diary of her 1918 experiences there, in the Adirondack Collection at the Saranac Lake Free Library. Shirley Morgan published a book about Evelyn in 2014, titled: Well Diary . . . I Have Tuberculosis: Researching a Teenager's 1918 Sanatorium Experience.

Evelyn worked as a stenographer and library aide.  She was a patient at Ray Brook Hospital from 1917 through the early 1920s. Since her father was ill in another sanatorium, Evelyn's mother accompanied her, working as a waitress, and later a laundress, in the Ray Brook sanatorium. Evelyn became close friends there with another patient, Helen Ryan. Evelyn was an employee at Ray Brook in 1925. At some point, Evelyn's health broke down again, and she became a patient in a cure cottage in Saranac Lake. She lived in Saranac Lake from 1926-1931, and stayed at Bellak Cottage, operated by her mother, Mrs. Fanny Bellak, where she met Michael Hayes.

Her hometown was Endicott, New York.  She is buried in West Lawn Cemetery, Johnson City, New York, in the plot with her father, Adolph Bellak, who died February 14, 1924.

The book Well Diary... I Have Tuberculosis by Shirley Morgan is available for purchase from Historic Saranac Lake and other outlets.