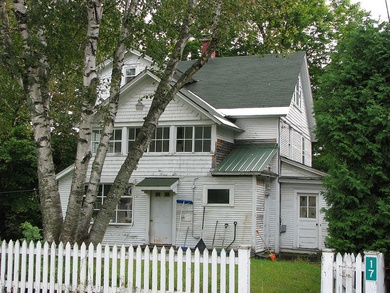 The present Saranac Lake Village Board has one more meeting— March 22. On March 16, two Trustees are to be elected and the new Board will sit April 5 when the new Village budget will be presented for consideration.

John Gregory, of 14 Fawn Street; Forrest Morgan, of 8 Fawn, and Zephy Trombley, of 15 Fawn, appeared before the Trustees at their meeting last night to protest again about the thoroughfare on which they live which, over the years, has had regular Spring floods.

"If we call a taxi and say we live on Fawn street, they won't send one but tell us to meet them on Helen street, Mr. Gregory said. Basements are flooded regularly, he added, and heating apparatus is damaged or ruined.

Village Manager Frank Buck said the solution is to get a workable drainage system for the low point in Fawn st., commonly known as Sagendorph Hollow. The situation has been studied year after year, he added, and it was always found that the drainage solution would be too costly.

"The WPA gave it up because of the cost," Mr. Buck said.

The Trustees told the Fawn st. delegation that further study would be given the problem.