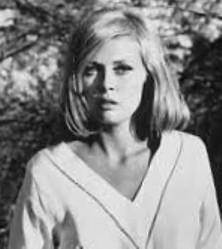 Dorothy Faye Dunaway, then known as Dorothy, worked as a waitress at the Dew Drop Inn on Broadway in the summers of 1960 and 1961 when she was a college student at Florida State University. She then went to Boston University to study theater, and one year later, in 1962, she played the daughter of Thomas Moore in A Man for All Seasons on Broadway in New York City. Five years later, in 1967, she had her first film role, in Hurry Sundown, and later that year, she played Bonnie in Bonnie and Clyde, opposite Warren Beatty, earning an Oscar nomination.

Faye Dunaway has become the most electrifying stage and screen property in the entertainment market today. In 1961 she was hustling pizza orders at Dew Drop Morgan's Broadway restaurant.

In the December 15 issue of Look Magazine she rates five pages and copies are being grabbed at the news stands at a brisk pace. "Sold Out" is the rule at most places. 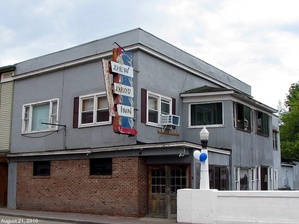 Faye, a working girl summering between Florida and Boston Universities was one of the better waitresses at Saranac Inn and when that historic hotel closed its doors, she gravitated to Dew Drops and became a regular in the summer of 1961.

Faye lived with several of her girl friends on Shepard Avenue and her good looks insured her of a busy time when not working her shift at Dew Drops.

She has made three movies in quick succession. All of them will be watched for in this area with special interest. Columbia featured her in "It's What's Happening" 1 ... Paramount snapped her up for "Hurry Sundown" and Warners was caught in the Faye fever and signed her for and "Bonnie and Clyde."

She rates pinup fanfare but is also a brainy, hard working actress who has charted a course of success with pinpoint accuracy.

In Manhattan she worked in five plays in a row. One meaty role was that of an alcoholic wife in "Hogan's Goat" where she fell down stairs nightly breaking her neck.

Dew Drop was pleased that Earl Wilson, Broadway columnist, recently mentioned her working in the restaurant but wished he could have obtained a mention in Look also. She was written up in an Esquire issuue during the summer months.

Faye covered the Saratoga races as "Working Press" in the summer of 1961 as a guest of Editor Peter Cox and Bill McLaughlin. She caught the eye of a horse in the paddock area who must have seen the real beauty of this hurrying actress and lost interest in the race itself. The horse finished seventh in a field of nine.

In reminiscing Dew Drop said she was a very capable waitress and business always boomed when she was swishing among the tables.

Naturally everyone who knew her is wishing her the kind of success that will eventually reflect well little on Saranac Lake where she starred as "One of Us."

Dew Drop has solicited the aid of Pontiac Theatre manager Tony Anderson to bring one of her movies here for a benefit showing to aid the Bobsled Club.

With a little luck Faye will be on hand for a personal appearance.