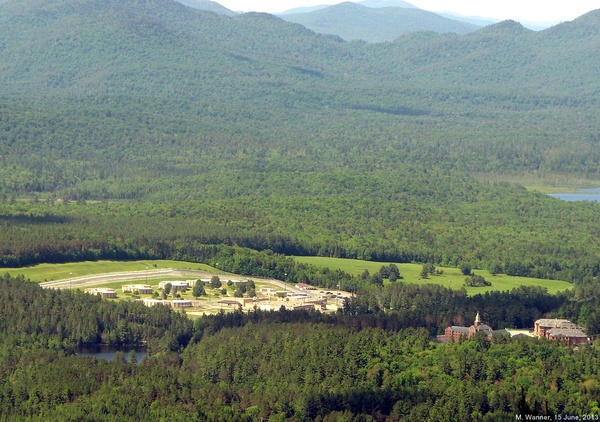 On August 25, 2010, the Adirondack Daily Enterprise reported that FCI Ray Brook houses 1,214 inmates, according to the most recent Bureau of Prisons prison count. The facility was originally built as the athletes' village for the 1980 Olympic Winter Games; security for the athletes was of great concern because of the murder of Israeli athletes by terrorists at the previous Olympics.

The Saranac Lake Chamber of Commerce speech this year was of particular interest and should put to rest myriad rumors.

Quinlan said that the prison is being converted now for fulltime use and that the staff will be hired throughout the summer, with all 221 staff members hired by October.

His words confirmed that this area is just about to get its biggest economic shot in the arm for a long time and put to rest foolish stories that somehow or other the federal prison was not going to open.

Quinlan said that the average salary at the facility will be $15,000 a year which means that the payroll will be some $3.3 million — or slightly more than the size of the total payroll of the Saranac Lake Central School system.

This will represent all new money to the area and, Quinlan said, "a majority" of the people hired to run the prison will be local.

Obviously the most highly paid supervisory jobs will be filled by career civil servants in the Justice Department who will move in from outside the area.

What the federal prison means is that there will be at least 110 new, permanent and relatively high paying jobs for local persons.

After his speech Quinlan said that the new prison will be a favored location for careerists in the Bureau of Prisons because of the beautiful natural surroundings.

Much of the $6 million total budget for the prison will be spent here — on goods and services as well as salaries. It is fair to say that (with the pass-along effect of new money) the impact of this budget on the local economy will be well into the 10's of millions of dollars.

The significance of this development cannot be overestimated. It should mean a period of real growth in our economy.