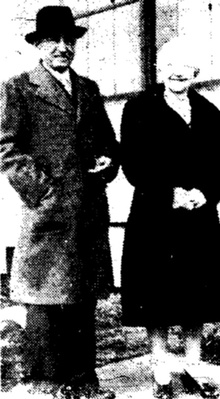 Ferdinand Claudius Lamy was a watchmaker and the father of skating great Ed Lamy.

Ferdinand Claudius Lamy, 84, resident of Saranac Lake for the past 59 years, passed away about 10:15 o'clock last evening at his home, 31 Lake street, following an illness of three months.

Mr. Lamy, one of Saranac Lake's earliest residents, had led a very active life until April when he was taken ill and had been bedridden since that time.

Mr. Lamy was born in Lyons France on May 24, 1864, the son of the late Arcinius and Margaret Lamy. He was the youngest son of 12 children. He came to the United States in 1888 and arrived to make his home in Saranac Lake the following year.

On Feb. 15, 1890, he married Miss Emma DeLisle, a native of Plattsburg, who came to reside in this village in 1888. The couple was married in the old Tip Spaulding block now occupied by Walsh's Cigar store and the Riverside Bar and Grill.

Mr. Lamy was a watchmaker by trade and he first worked in a shop on Broadway where Altman's is now located. For 20 years, he served as watchmaker for the late F. W. Loomis who had a store in the building now known as the Downing block on Broadway.

In 1910, Mr. Lamy opened his own business and was responsible for building the block where the Blue Gentian restaurant stands. The building was first located on the spot where the Pontiac theater is and later it was moved its present site.

For the past many years. Mr. Lamy has conducted his watchmaking business in the Dwyer Drug store at 36 Broadway. He worked there right up until the day in April when his health failed.

An active fireman in his younger years. Mr. Lamy saw to it that a fire department was established in Saranac Lake shortly after his arrival in this village. He was a communicant of St. Bernard's church.

Funeral services will be conducted at 10 o'clock Monday morning in St. Bernard's church with members of the Fire department serving as pall bearers.

Interment will follow in St. Bernard's cemetery. The body will repose at Keough Memorial chapel.