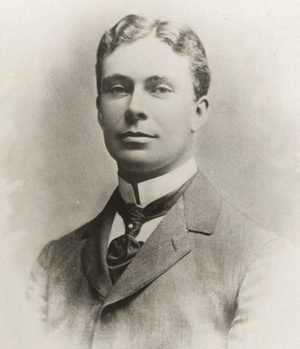 Ferris Jacobs Meigs was a major lumberman in the Adirondacks.  He was a son of Titus Meigs.  White Birches Camp on Follensbee Pond was built as a summer home for Ferris Meigs and his family, although it was owned by the Santa Clara Lumber Company. 2

Meigs was educated at the Dwight School for Boys in New York City. He earned his B.S. at Yale University in 1889. During college his summers were spent at his father's mill and woods learning the lumber business.  After graduating Mr. Meigs joined his father in the development of large lumber tracts in the Adirondacks near Tupper Lake, and later helped introduce scientific forestry in the Adirondack region. He succeeded his father as president of the Santa Clara Lumber Company in 1911, holding the office until the company ceased business in 1941. Under his direction the company became "a leader in the conservation of timber in the Adirondacks and it was complimented publicly by state forestry officials for work done in tree nursery and planting. For years at least one tree was planted for every tree cut. Success in the lumbering operations involved the application of scientific principles in cutting and hauling logs and in modifying the mill operations to suit the changing character of the logs. The company devised methods which departed radically from the conventional procedure [then customarily used] where the trees are larger and transportation easier. It was the first company to prepare and sell processed pulpwood for paper manufacture." 1

He was a charter member of the Empire State Forest Products Association.

Watch the Land Grabbers of the Adirondacks

ALL New York lovers of Nature and of the forest primeval will be inclined to distrust Article VII of the new Constitution, which puts the Adirondack woods under control of nine non-salaried commissioners, holding office for nine years and responsible to nobody except a future Governor of unknown affiliations. Especially will they doubt the wisdom of the "reform" when they learn that this change was proposed in the convention by Ferris J. Meigs, chief of one of the lumber corporations now before the courts for denuding the Adirondack Mountains of their timber. The devastation already caused in Cold River Valley would furnish amazing proofs of disregard for public interests were a camera man to make a Journey through that region.

Grabbing of Adirondack land has been exposed so often that mention thereof sounds trite, but if the truth could be told about the conduct of previous "conservers" of the Adirondack forests, universal indignation would follow.

Thousands of acres have been "taken up" in times past by worthy (?) citizens for the sole purpose of re-sale to the State.

Preservation of the Adirondack forests is imperative, if the noble Hudson River is to remain an artery of commerce to the heart of this State and the West. Millions of money, spent up on the Barge Canal, will have been wasted if the Hudson's depth of water be materially lowered, as it certainly will be.

Abuses by the lumber and pulp companies in the Adirondacks have become so flagrant that one is inclined to advocate the planting of guards upon every hill in those mountains, armed with machine guns, to put final end to timber marauders bent on denuding the forests. Such selfish, mercenary acts affect the comforts and the pockets of every citizen of this metropolis. All food supplies from the West become more expensive when they have to be transferred from boats to trains in order to reach tide water.

I don't know how to advise a vote against Article VII, but it ought to be defeated.