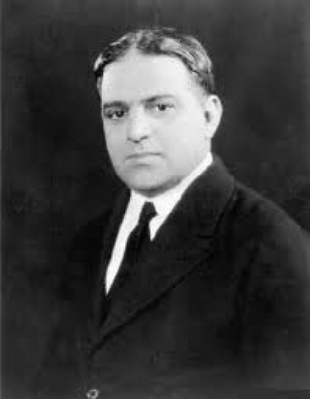 Fiorello H. LaGuardia was served as Mayor of New York for three terms from 1934 to 1945. Previously he was elected to Congress in 1916 and 1918, and again from 1922 through 1930. He has been acclaimed as one of the three or four greatest mayors in American history. Only five feet tall, he was called "the Little Flower" (Fiorello is Italian for "little flower").

His first wife, Thea, came to Saranac Lake for the cure, staying at the Collins/Beattie Cottage on Park Avenue in 1921, not long after the death of their first child on May 8, 1921. LaGuardia visited her every third weekend until she was sent home in late November, just before her death at age 27.

On his Saturdays in Saranac Lake, Mr. LaGuardia would stop in for a shave and a chat at Carl D'Ambrisi's barber- shop at 65 Broadway. Mr. D'Ambrisi had lost his own wife to the White Plague in 1916, and he and his sons knew from experience what the weekend visitor from the city was suffering.

At that time, the D'Ambrisis were living at 8 Circle Street, just around the corner from 76 Park Avenue. One day Mr. LaGuardia mentioned to Carl D'Ambrisi how his wife missed Italian cooking and how much she might appreciate some good spaghetti with meatballs once or twice a week. So every week at least once a week, the D'Ambrisis made an Italian dinner for Thea LaGuardia and brought it to 76 Park Avenue, that the Little Flower's wife might feel a little more at home. 1