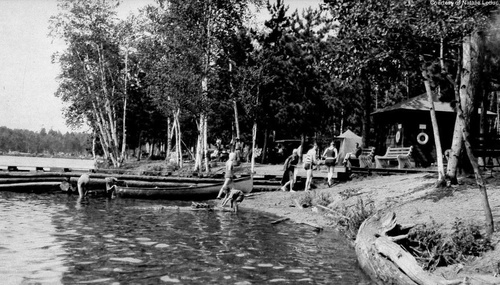 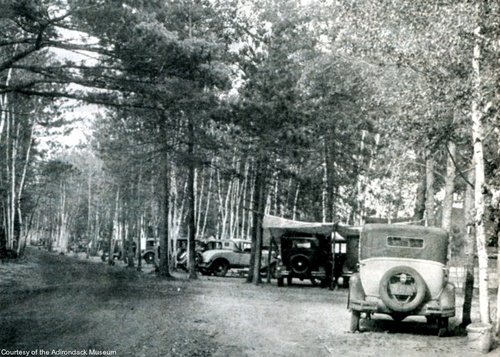 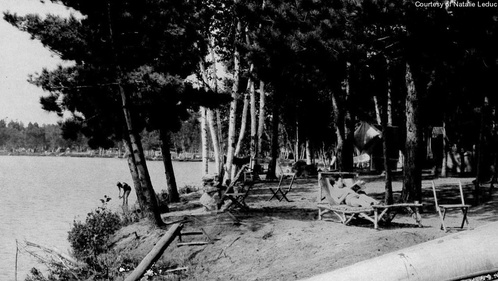 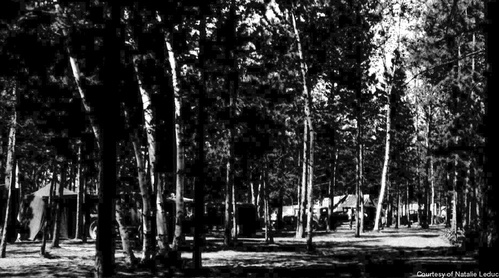 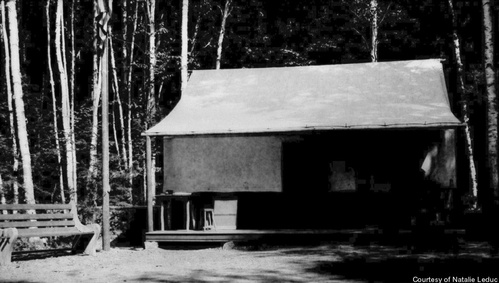 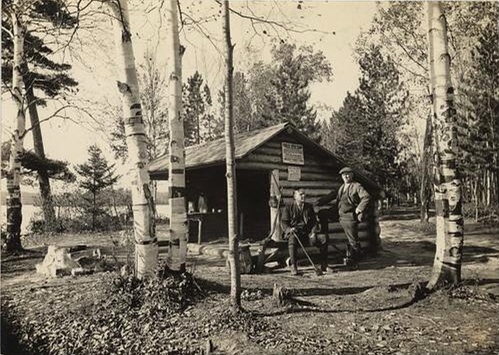 Fish Creek, c. 1926 (New York State Archives) Fish Creek runs from Little Square Pond east to Upper Saranac Lake. It is the site of one of New York State's largest campgrounds, with 355 campsites. In the 1930s, it was the site of a large Civilian Conservation Corps camp.

A campers' strike against a conservation department ruling flared thru Fish Creek public campsite Saturday night and resulted in a mass meeting of more than 1,000 protestants. They wired their objections to Conservation Commissioner Lithgow Osborne and followed them up with telephone calls.

The strike resulted from an order issued by the campsite ranger and by District Forest Ranger James H. Hopkins to the effect that doubling on campsites is to be discontinued. The ruling came after an inspection was made by T.J. Shorey of me conservation department. Shorey reported that many campsites were overcrowded causing unsanitary conditions.

27,549 Have Registered This Summer As Campers On Pond Near Saranac Inn—Hearthstone Point Only Site in State Used More, Registering 37,064

Registration at the free public camp sites in the Adirondacks and Catskills maintained by the State of New York indicates that these vacation resorts will be used by a far greater number of persons this year than any previous year, Conservation Commissioner Henry Morgenthau, Jr., announces. Up to and including August 1st, 241,134 persons had registered at 18 of the principal camp sites in the Forest Preserve out of more than 30 free camp sites operated by the state. This compares with a total registration for the entire season of 1930 of 267,886 persons, with five of the busiest weeks of the present season still ahead. Commissioner Morgenthau estimates that the close of the vacation season will bring the total registrations this year to at least 350,000.

The Forest Preserve camp sites are equipped with tent space, fire places, automobile parking spaces, sanitary facilities and water supply. At all of the principal sites there is a trained camp site ranger in charge. Swimming- beaches are a feature of most of the sites and nearly all of them are in the midst of good fishing territory, besides offering the opportunity for hiking on mountain trails, and in many cases for boating on the lakes.

...The most elaborate of the six sites in this section is the Fish Creek camp where 46,250 persons spent carrying vacation periods last summer. While the average number of camp days for each person was two, some persons remained as long as two weeks while others [stayed] there only a single day...

Forest corps tent cities at Cross clearing and at Fish creek, in the Adirondack mountains, will be built Friday and Saturday, according to word received by Forest Ranger James H. Hopkins from army officials.

Col. W. E. Weeks of Governors Island will supervise the raising of the tent cities. A third forest army camp will be at Barnum pond, 15 miles north of Saranac Lake and about the same distance south of Malone.

Cross clearing is between Saranac Lake and Tupper Lake and Fish Creek is near Saranac Inn. Each of the three camps will hold 240 recruits. The camps will be opened June 1.

The Fish Creek camp site, which received 46,250 campers last year, is to be enlarged by the Roosevelt forest workers. Canoe portages and trails into the woods will be conditioned. A 5,000-acre pine plantation at Barnum pond will have fire lines cut, and forest fire prevention work will be the chief activity at the Cross clearing camp. The state conservation department will furnish the work directors.

60 MORE JUNIORS TO ENROLL IN CCC

Forty more youths from the towns in the county and 20 from the city of Plattsburgh will be enrolled Thursday in the Civilian Conservation Corps and sent to Fish Creek Camp near Lake Clear. Orders to enroll, the youths were received yesterday by Andrew W. Simoys, clerk of the Clinton county board of supervisors and Verian D. Otis, city commissioner of public welfare.

Thirty-six youths from the towns in the county and 20 from the city enrolled in the Civilian Conservation Corps departed yesterday morning for Fish Creek Camp near Lake Clear Junction where they will serve a six months enlistment.

According to press announcement, dedication services for a large amphitheater at the state camp site at Fish Creek are being planned. Stages, motion picture projection booths, and other necessary equipment have been installed. While we believe that the free camp sites are a boon to those who wish to travel and see the state and are without funds for hotel or room accommodations elsewhere, we think the state is extending itself beyond reason in providing entertainment for its guests. We are not informed how all this comes about or is handled but on the surface it appears that by showing motion pictures and providing entertainment that would otherwise be sought in he surrounding towns it is taking income from the business houses and theatres who have a heavy all-year expense. The amphitheater is planned to hold 2000 people and is being constructed by CCC labor.

The topic of the camp site robbing the livelihood of the hotels has been discussed to a point reaching exhaustion. It is the true reason for so many of the hotels going into the hands of the receivers and yet there seems to be nothing that can be done about it. The bill was killed providing for a small fee at the sites at least large enough to cover the expense of upkeep of the grounds. Over 46,000 people have stayed at the Fish Creek camp already this summer— enough persons at one dollar a night to guarantee a good season to two large hotels. All of this was serious enough without the Empire state becoming so free hearted that it provides entertainment for the campers, many of whom are well situated financially and able to pay for accommodations and entertainment furnished by those who depend upon patronage for their living.

[…] The boys from Fish Creek are engaged in construction of ski trails near the Glenwood estates, and the Lake Kiwassa section; construction of a road into the fish hatchery pond, near Saranac Inn; working in the fields at the tree nursery at Lake Clear; and working at various sections of the Fish Creek public campsite. […]

CCC activities at Camp S-56 at Fish Creek will be discontinued in the near future, it has been officially announced, and the entire unit will be moved to a new site at Camden, N. Y., about 40 miles northwest of Utica.

The fact that scheduled work at the Fish Creek camp has been practically cleaned up is cited as the reason for changing the camp's location.

During the approximately two and a half years that Camp S-56 has been in operation there the CCC's have greatly extended the facilities of the state's most popular public campsite, constructing hundreds of open fireplaces, clearing campsites, etc. Recently they completed construction of a huge rustic amphitheatre there.

CCC Camp S-63 at Cross Clearing, commanded by Captain Alan G. Spitz, will take over whatever unfinished work may remain in the Fish Creek Camp sector when it is vacated, besides taking charge of the camp buildings and whatever property is left behind until arrangements for permanent disposition have been made.

One of the other needs cited was the completion of the Fish Creek camp site (about 20 miles this side of Tupper Lake). This was begun in 1951, he said, and the development of additional camping accommodations has never been completed. 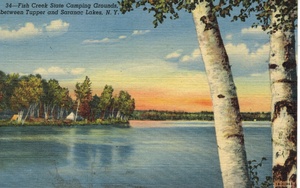 The state camps, with hundreds of camp sites, are packed tight. A thirty-thousand-dollar trailer is parked next to two boys who cycled up from Syracuse with a pup tent, fishing tackle, and ten dollars to last two weeks. A place like Fish Creek Camp, with four hundred fireplaces alight at night around seven miles of lake shore, is one or the exciting sights of the Adirondack summer.

For more photographs, click here and search for Fish Creek.