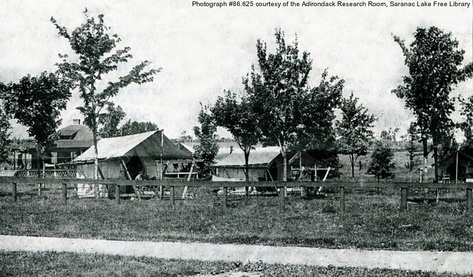 Other information: Fletcher Farm was built by Wilson F. Fletcher operated as a cure facility for part of its history. As a young man, William Kollecker worked there. Margaret Sanger is believed to have stayed at Fletcher Farm as a patient.

Said to be the first airplane to land in the Adirondacks,
October 1912 at Fletcher Farm, flown by George A, Gray.
Adirondack Daily Enterprise, January 20, 2001.
Photo #83.11 courtesy of the Adirondack Room of the Saranac Lake Free LibraryThe 1908 Anti-Tuberculosis League Cottage List indicated that they had a capacity of 50 patients, but were only open during the Summer.

It was owned for a time by John M. Rogers.

Among the new places to go this season is Fletcher Lodge, just off the Bloomingdale road. Two hundred people attended the opening of the resort on Saturday night where they found things to their liking. 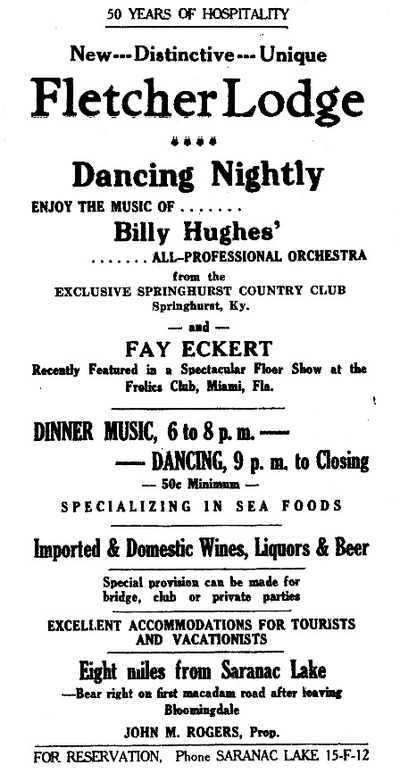 Lake Placid News, July 3, 19Arranged and furnished in excellent taste several rooms are given over to the diners. The main porch room overlooks a magnificent panorama of mountains including Whiteface. Among the distinctive and unique features of the entertainment offered in the evening is Fay Eckert, fascinating songstress and blues singer. She has appeared in a number of the best night clubs and during the past season was the feature in a spectacular floor show at the Frolics club in Miami. Later she was at the Black Cat Casino in Chicago for 16 weeks.

Well known to dancers in the middle west and south Billy Hughes and his orchestra will play at the lodge this summer. He comes here from the Club Sheridan in Utica. Known for his sophisticated dance rhythms, Mr. Hughes played for two seasons at the Merry-Go-Round club in Fort Wayne, Ind., and later was at the exclusive Springhurst Country club, Springhurst, Ky.

The lodge is reached by turning right on the first macadam road after passing through the village of Bloomingdale. It is 8 miles from Saranac Lake. Special provision may be made for bridge club or private parties.

Fletcher Farms lodge, near Vermontville, long a health resort and more recently a night club, was completely destroyed by fire of undetermined origin late yesterday afternoon. John Rogers, of this village, is owner of the lodge. Damage is estimated at $35,000.

The annex, within 20 feet of the main lodge, was badly charred on the end nearest the main lodge. A combination barn-tenant house and numerous cabins escaped ravages of the fire, although an ice-house near the main lodge was destroyed.

Flames were still visible this morning, as portions of the razed structure burned within the foundations. Sawdust packed around ice was also still smouldering.

Firemen, answering the call from this village, aided in saving the annex, until the village pumper broke down. There was plenty of water available at the time of the breakdown, although firemen say little more could have been done. The main building was practically gone by the time of the firemen's arrival, an assistant chief states.

The main lodge was built approximately 60 years ago by John Fletcher, and it came into the possession of Mr. Rogers approximately 35 years ago. He had since operated it as a health center, until it was converted into a night club last year.

Mr. and Mrs. Rogers were not living at the farm, although a caretaker was present, cleaning, at the time of the fire's start. It was discovered by a neighbor, William Johnson. Bloomingdale and Saranac Lake fire departments were called.

The owner stated that the building was partially covered by insurance, but that future rebuilding plans were uncertain at this time.

In addition to the main building loss, a structure that would accommodate 25 persons, numerous wild-life specimens and extensive furnishings were destroyed, it is reported. Furniture in the annex was saved.

Fletcher lodge in Vermontville, built 50 years ago by the late John Fletcher, pioneer Adirondack resident, was razed shortly after 4 o'clock Friday afternoon by fire discovered by William Johnson, a neighboring farmer. Loss was estimated at $25,000 as firemen from Bloomingdale and Saranac Lake saved the annex and numerous cabins.

Of frame construction two stories high, the building was consumed like tinder and was burned to the foundation before firemen from Saranac Lake, nine miles away, could reach the scene.

For more than 35 years Fletcher Lodge enjoyed the distinction of being an ideal Adirondack health site. Hundreds of prominent persons from large cities thruout [sic] the east made visits to the place. It was beautifully located on a slight hill affording a beautiful view of Whiteface mountain and other Adirondack peaks.

In 1936 John Rogers, proprietor of the farm, renovated the main building and turned it into a night club which was successfully operated until late in the fall. Repairs were being made preparatory to an early opening when the fire was discovered.

The lodge was built by Fletcher and was a veritable museum for trophies of Adirondack wild life that were used in the decorative scheme. At the builder's death ownership passed into the hands of his widow who later married the present owner.

Firemen in fighting the blaze were handicapped by lack of water. It was necessary to lay several hundred feet of hose to obtain water from a brook and pump from the stream. The loss was covered by insurance, persons close to the owner stated.