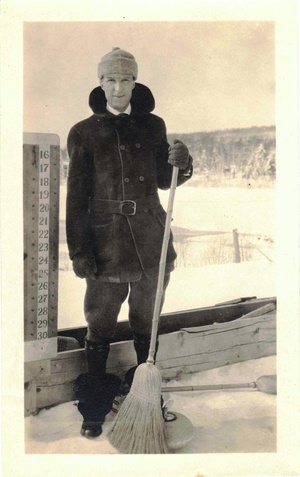 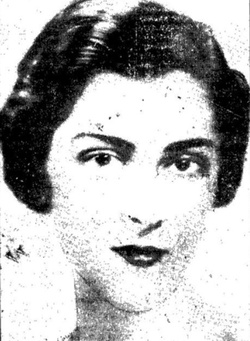 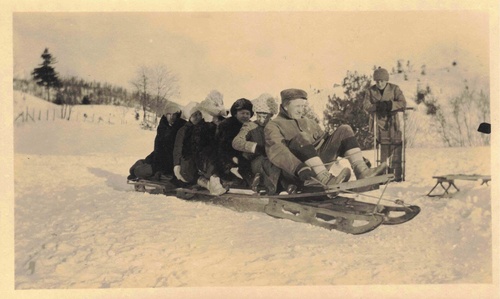 Photograph of Fletcher Durbin (left) and Hazel Durbin (third from left with scarf covering her face) on a sled on the side of Baker Mountain. Historic Saranac Lake Collection, 2020.2.53. Courtesy of John Durbin.Fletcher McCullough Durbin was a patient who stayed at Alta Vista in the early months of 1911. His father, Winfield Taylor Durbin, had been the Republican governor of Indiana from 1901-1905. Fletcher made a photo album of his cure porch and the views from it, and of the many outdoor excursions he took that year. He occupied the Harris Cottage in Rockledge Park between February 1 and July 15, 1913. In the mid-teens he rented the house at 22 Catherine Street for himself and family, where he continued to take pictures. Some of his photographs appear on the pages for the Williams Cottage and the Larom-Welles Cottage.

Fletcher Durbin, 88, a native of Anderson, and a son of a former governor of this state, died July 19 at Chicago after a brief illness. Funeral services were conducted in Chicago Saturday.

After leaving this area many years ago, Mr. Durbin had been a real estate broker until his retirement. He had resided at 1500 Lake Shore Dr., in Chicago.

His father was Col. Winfield T. Durbin, elected governor of Indiana in 1900. Fletcher was born in 1879 to the Colonel and his wife, the former Bertha McCullough of Anderson, at the family home, a Victorian mansion on the southwest corner, 10th and Jackson Sts., which was razed several years ago.

Fletcher Durbin is survived by his widow, the former Hazel West of Indianapolis, two children, Winfield Durbin of Chicago, and Mrs. Eleanor Porter of Virginia: three grandchildren and one great-grandchild.

MAN AND WIFE LOSE THEIR WAY WHILE CIRCLING BAKER MOUNTAIN

Saranac Lake, Feb. 16.- Mr. and Mrs. Fletcher M. Durbin of Rutherford, N. J., were lost on Baker Mountain for half the night and were found by searching parties in an abandoned lumberman's shanty, without fire and suffering from the zero weather, about 3 o'clock Thursday morning. Mr. and Mrs. Durbin had been absent from the village about twelve hours when they were found.

They left Saranac Lake at 2 o'clock Wednesday afternoon on snowshoes, planning to make the circuit about the base of Baker. They were dressed lightly for the snowshoe tramp, and this, in the zero cold of the night, made their sufferings more acute than they otherwise would have been.

The snowshoers entered the forests at the base of Baker. They had made considerable progress toward the Mackenzie side of Baker when they found themselves uncertain of directions. Later they were convinced they had lost their way, and they took the up-trail in the hope of coming out on the summit and thus getting the play of the land. Darkness overtook them, however, when they were about two-thirds up the mountain.

They found the abandoned hut and took shelter in it. The shack afforded poor protection from the bitter cold, but it was better than a night in the open, and rather than take chances of wandering in the woods all night and courting-broken limbs or other accidents, they decided to remain there.

When they failed to return to town for dinner, friends were notified. When at 7:30 o'clock in the evening they were still missing two searching parties were organized. Armed with revolvers, lanterns and electric flash lights, searched until midnight, firing shots and calling in an effort to locate the lost snowshoers. The search was in vain until late at night, when voices in response were heard by the searchers and the shouts led them to the hut where Mr. and Mrs. Durbin had taken shelter.

They had been without matches and had no fire. The thermometer, stood at zero in town, and the searchers say it was even colder on the mountain. Mr. and Mrs. Durbin were tired out and suffered greatly from the extreme cold.

“It was a terribly cold night to be without fire,” said one of the searchers, “and Mr. and Mrs. Durbin would probably have frozen to death before morning if we had not found them.”