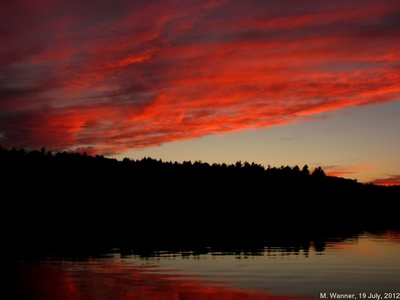 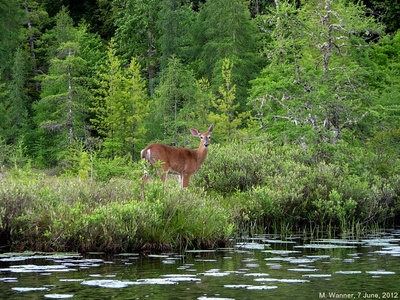 A deer on the shore of Floodwood Pond

Floodwood Pond is a 256-acre pond just north of Rollins Pond and just south of the St. Regis Canoe Area. The tracks of the New York Central run along its western shore near the hamlet of Floodwood, and Floodwood Road touches its northern shore. There are eleven public campsites on Floodwood.

A barely canoeable creek connects Floodwood to Rollins, paralleled by a carry trail. A more generous stream connects it to Little Square Pond, from which Upper Saranac Lake can be reached via Fish Creek and Square Pond.

SPRING IN THE ADIRONDACKS.

What Mary Burns Thinks of Things at Floodwood Pond.

The Potsdam Herald of Friday contained the following letter from Floodwood Pond:

FLOODWOOD POND, May 9.— One usually thinks when spring comes that lumber camps are deserted, and the woods given up to sportsmen, invalids and pleasure seekers. But if one would just stop at Floodwood Pond they would find a very busy place.

There were seven or eight camps within the radius of six miles and 70,000 logs deposited on Long Pond, 7,000 on Rawlin's Pond, and all have to be driven into Floodwood Pond situated between the two. Dams have to be built to raise the water in the small streams connecting these ponds, and one flows through a small culvert under the railroad. Much delay has been caused and great expense incurred by the failure of the railroad managers to keep their promise to take down the culvert and build it larger. The dam went out holding the water and it began to wash out and then the railroad employes were called to repair damages.

The logs on Long Pond north and Rawlin's pond south being run into Floodwood Pond are boomed ready to be loaded and shipped by car to the big Hurd mill at Tupper Lake. A long switch is nearly completed on which to run the cars to be loaded by jackworks from the pond seventeen feet below. Mr. C. Snell and son have graded 12,000 feet ready for the ties and rails. The cost of the road is about $1,800. There are four families living there, but many of the men live at Tupper Lake and go up on the train at night and back in the morning. The many men at work on the logs, those on the railroad, the driving on the old coach road to Saranac Inn, the people coming and going from the station and the trains flying past many times a day and night, make one feel as though a bit of the city had moved into the wilderness. Snow is still to be seen (May 9) and the maples are only showing their brown buds.  But the poplars are of delicate green and we know that spring is once more with us.