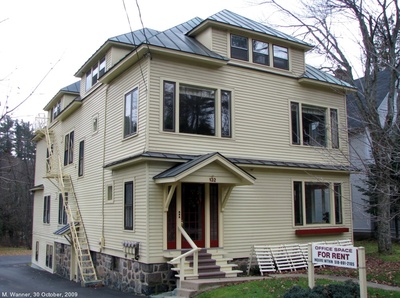 In the late years of the 20th century, after the firm moved from offices in the Haase Block, this cottage housed the offices of Wareham-DeLair Architects, successors to the firm of Coulter & Westhoff, one of the longest-established architectural firms in New York State.

Bud Duffy lived next door, and worked as a tray boy for the occupants, who were Norwegian Seamen.

Norwegian Sailors known to have cured at the Fortune Cottage include Kaare Ole Lund, as well as the following:

The large empty lot next door on the corner, numbered 3 Pine Street or 73 Bloomingdale Avenue, now belongs to this property; it was the site of one of the Endicott-Johnson Cottages.

The Fortune Cottage appears in the background of the photo on the 3 Pine Street or 73 Bloomingdale Avenue page.