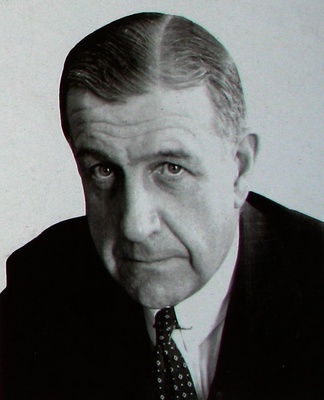 Francis Berger Trudeau. From an historical marker in front of 105 Main Street.

Dr. Francis Berger Trudeau was the fourth and last child of Dr. and Mrs. E. L. Trudeau, and the only one to live to survive them. He became a doctor, practiced in Saranac Lake and succeeded to many of his father's responsibilities. He practiced medicine in E. L. Trudeau's home and office at the corner of Church and Main Streets, where his son Francis B. Trudeau later joined him. 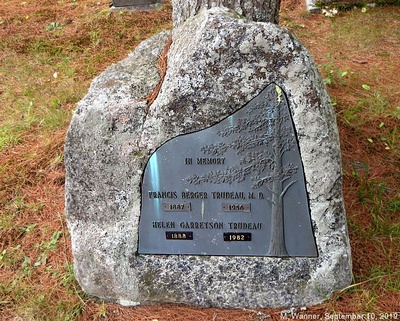 Tombstone of Helen Garretson Trudeau and Francis Berger Trudeau
at St. John's Cemetery, Paul Smith'sTrudeau was born in Saranac Lake, New York, on January 2, 1887. He graduated from Yale College in 1909, and then studied medicine at Johns Hopkins University, receiving his medical degree in 1913. He interned at Bellevue Hospital in New York before joining his father's medical practice in Saranac Lake, shortly before his father's death.

In 1914 he married Helen Garretson; they had two sons: Edward, who managed a radio station in Albany; and Francis Jr., a physician in Saranac Lake.  They may have first lived at 20 Franklin Avenue, and later in Glenwood Estates.

Not surprisingly, Francis Trudeau's medical interests centered on tuberculosis. He wrote a number of papers on the subject, and served as a director of the National Tuberculosis Association. For nearly forty years he was a trustee of the Trudeau Foundation, of which he became president. After a long term as president of the Trudeau Sanatorium medical board, he was elected president of the institution in 1944.

He served as a Captain in the Medical Corps of the U. S. Army during the First World War. In 1947, he received from King George of England His Majesty's Medal for Services in the Cause of Freedom, for caring for members of the British fighting forces in America. He was elected president of both the Saranac Lake and the Franklin County Medical Societies.

He was also a sportsman and conservationist, and was a member and one-time president of the Saranac Lake Fish and Game Club.

He was a member of the Climatological Association for thirty-six years, and served as Recorder from 1930 to 1946.

In 1950, Trudeau had a heart attack. He recovered, but persistent angina made him less active. The need to close the Sanatorium in 1954 due to a dramatic decrease in the number of patients was hard on Trudeau, signaling as it did the end of an institution that he and his father had spent their lives serving.

On July 19, 1956, Francis Berger Trudeau was boating on Upper St. Regis Lake with his wife and daughter-in-law and a friend, when he died suddenly, without warning. He is buried in the cemetery of St. John's in the Wilderness Episcopal Church that his father founded.

“The three phases of TB treatment,” from the Dr. Francis Berger Trudeau’s Preface to his patient Isabel Smith’s memoir, Wish I Might, February 12, 1955:

This is a letter from Francis Berger Trudeau to his niece, Alice Livingston Trudeau MacHenry

CONSULTATION BY APPOINTMENT
TELEPHONE   NO . 1

Thank you so much for your nice newsy letter which arrived safely with a big sticker on the outside "opened by Censor" but not one line was cut out, so I got every bit of your news.

Certainly I was relieved to hear that at least so far the war had not come dangerously near to you, although I have seen in the papers the last few days that the Germans are beginning to drop a few bombs on Ireland just for good measure.    To us over here it seems so inconceivable to think that Ireland can remain neutral on an island the size of the British Isles, which may be invaded any minute by the Germans, who undoubtedly will swarm over your country in hordes if they find it is to their advantage in their attempt to invade England. However, I am a long way off to even talk about these questions with you who live in their midst and probably there is some very good reason.   At any rate, the whole picture certainly does not look any too cheerful at the present time and I feel perfectly confident that it will only be a matter of time before our great nation will be pulled into the struggle.    Certainly, things do not look too bright for the British unless we do something pretty drastic about it.   Just what it will be time only will tell.

I do not remember whether or not I told you in my last letter that Frank is in the Naval Reserve at Yale University and next month expects to go on a two week's cruise on a destroyer as part of his course.    We are naturally hoping that he will be allowed to complete one more year to finish his course at Yale which will also complete his course in the Naval Reserve, before he is sent into active duty.   However, one can never tell and someday you may find him at your door asking for a meal.

Things in this country seem so quiet and peaceful compared with what you are all going through in England and especially up here in the Adirondacks, if we did not read the papers and listen to the radio, we would not think it possible that a world war was going on.

The snow has finally gone and spring has come to us in its full glory and it is such a relief to be able to run out of doors again without either a hat or coat on and not be frozen as we were for the past four or five months.

I was indeed terribly interested to hear what a large family you have raised and how well they are divided as regards boys and girls. Someday I hope we may all meet for a Trudeau family reunion, for there are so few of us anywhere in the world. However, as you say, if we don't possibly our children may and I only hope that someday this will come about.

We all so loved hearing from you and we want you to know that we all still love you dearly and are all behind you in what you are going through over in your war torn part of the world.

-- copy of letter provided by Patricia and Ned Trudeau, 2013.

The Adirondack Enterprise, describing the marriage last week of Dr. Francis Berger Trudeau, son of Dr. and Mrs. Edward L. Trudeau, Saranac Lake, and Miss Eleanor Helen Garretson, daughter of the late Justice and Mrs. Abram Q. Garretson of Morristown, N. J., says:—“Socially the wedding was the most brilliant of many seasons in the Adirondacks. It was attended by a notable assemblage of visitors to the camps of the St. Regis Lakes and Paul Smith's Hotel. Many friends of the bride and groom, and of Dr. and Mrs. Trudeau were present from Saranac Lake, while not a few of the guests came from abroad to attend the ceremony. To Dr. and Mrs. Trudeau the day was one of the happiest of many a year, for both had long been looking forward to the event. St. John's in the Wilderness, where the ceremony took place, is a log church, and its influence reaches wide into the affairs of well known men. The board walk to the door was a balsam lane, and within the church was fragrant with balsams and bracken, in which daisies were intermingled. Mrs. Walter H. Robinson, of New York, was at the organ, and as the guests assembled rendered delightfully a programme which included The Angel's Serenade by De Braga, The Evening Star from Thannhauser, Last Night by Kjerulf, and The Traumeri by Schumann. The processional was The Bridal Chorus from Lohengrin. The bride entered upon the arm of'her brother, L. B, Garretson. She was attired in ivory satin and old Carrickmacros lace, with tulle train held down with orange blossoms, and lace veil held with a wreath of blossoms. She carried a bouquet of lily of the valley and orange blossoms. Her bridesmaids were Miss Mildred Eddy and Miss Dorothy Dennis, of Moristown, N. J.; Miss Isabel Hoyt, of New York, and Miss Charlotte Whitney, of Rochester, N. Y. Their dresses were of ecru lace with green tulle sashes. They wore lace hats trimmed with green tulle and pond lillies, and carried large bouquets of ferns. The groom and his best man, Dr. Gilbert Horrax, of Boston, Mass., met the bride and her party at the altar. The recessional was Mendelssohn's Wedding March. The ushers were Dr. John J. Morton, jr., of New York; Dr. Robert L. Levy, of Baltimore, Md.; Mr. Henry M. Thomas, Jr., of Baltimore, Md.; Mr. Paul S. Andrews, of Syracuse, N. Y.; Mr. P. R. Dickey, of Pasadena, Cal.; and Mr. Harold Phelps Stokes, of New York. Following the ceremony there was a brief gathering of the members of the bridal party at the cottage of Dr. and Mrs. Edward L. Trudeau, and then followed a wedding breakfast, which was served in Paul Smith's Casino. After their wedding journey the newly wedded couple will spend the summer at the cottage of Dr. and Mrs. Edward L. Trudeau, at Paul Smith's. They will be at home in Saranac Lake after October 1st.” A long lists of guests, including many of the most prominent people in the country, is given. Among them we notice Dr. Walter B. James, Edmund Penfold, Miss Polhemus, W. W. McAlpin and Mrs. Carl Eley, of New York.

See also: See also: "Repressions," a set of limericks about the doctors by Mildred Blanchet, posted at the bottom of her page.