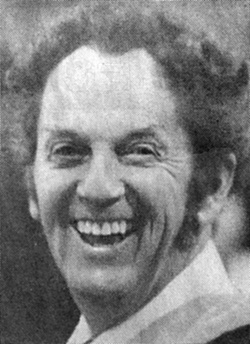 A full-page profile of Frank Casier appeared in the Adirondack Daily Enterprise on Saturday August 29, 2015.

Francis David Casier died peacefully on Aug. 7, 2016, surrounded by his family. He was 97 years old.

Francis, better known as Frank, was born on Friday, Dec. 13, 1918, in Lyon Mountain, son of Jerome Casier and Lula King Casier. After graduating from high school in 1936, Frank went to work in road construction. In 1938, he was able to attend the U.S. government trade school in Malone, and a year later he went to welding school in Hartford, Connecticut. After that, he was able to work in shipyards in New York and New Jersey. In 1941, Frank was diagnosed with tuberculosis and needed to move to a sanatorium in Ray Brook, where he was fortunate enough to be cured by 1943. Frank was unable to enlist in any of the armed services during World War II because of the spot on his lung left from TB and served instead in the Merchant Marine. Frank crisscrossed the world several times serving in the South Pacific, the Indian Ocean, the Mediterranean, the North Atlantic, and the Persian Gulf. In 1945, he suffered a recurrence of TB and contracted malaria. He was sent home and ended up in Ray Brook once again. While he was there, he bid on properties that were up for tax sale in Saranac Lake and ended up with his first real estate investments. The tax sale purchases led to a series of purchases, rehabilitations, and sales. That, in turn, led to selling appliances out a garage with a friend, and in 1949, Casier Utilities Inc. was incorporated, a business he would keep for 25 years.

At age 32, Frank met Audrey Delaney on a Memorial Day weekend. They dated for two years and married in 1950. Audrey became not only his wife but working partner in his businesses. In 1959, their son David was born, and it was not long before you would find the whole family on one of his many land projects that he nurtured the rest of his life. Eventually Frank retired from the retail business, although the furniture and appliances store he ran still bears his name today in town. He would then move on to his previous love, property development. He continued to own and renovate properties in Saranac Lake and Florida, including the 5th St. Gym in Miami, the Alpine Hotel, and many houses and commercial buildings in Saranac Lake. He also created the Fish Creek Park, Rockledge Park, Lake Flower Park, Saranac Sites, Mt. Pisgah Park, and Cliff Park subdivisions.

Feeling indebted to Saranac Lake for helping him become healthy again after the war, Frank involved himself in many civic activities such as the Lions Club and, along with other community members, helped form the chamber of commerce and North Country Community College and eventually served on the board. He also supported many human rights organizations and locally was deeply involved with the Save Our Homes Committee, The Adirondack Defense League, and a civil rights newspaper The Adirondack Defender. By the early '70s, Frank had accomplished his financial goal, having multiple successful businesses, land, equipment, and stock. Wanting to feed his interest in the humanities, Frank enrolled in the MEC program at Barry University in Miami, Florida, where he graduated magna cum laude in 1981. He was also elected to Who's Who in American Universities and colleges. In 2007 he was Citizen of the Year in Saranac Lake, an honor he was very proud of. He continued to have an active and watchful eye on his life's work right up to his death.

He leaves his wife of 65 years, Audrey, his son David and his wife Linda and their daughter Cara, his sister Dr. Esther Casier Quinn, and several nieces and nephews. He was predeceased by his sister Bernice Casier and his brother-in-law Vincent Quinn. Frank also leaves behind a legacy of hard work, hope, and compassion to help others in need. His philanthropy and love for the community he served, paired with his "I will not quit!" attitude, made his incredibly long and fruitful life one that will not be forgotten.

The family sincerely thanks Dr. David Johnson and many others who provided care and compassion for Frank and his family over the past several weeks. Their guidance and support was invaluable, and our appreciation goes beyond words.

Casier is SL's Citizen of the Year

By WILL ABRUZZI Enterprise Staff Writer

SARANAC LAKE - Francis "Frank" Casier is the Saranac Lake Citizen of the Year.

The Saranac Lake Area Chamber of Commerce presented Casier with the award Wednesday night at its annual meeting and dinner, which was held at the Red Fox Restaurant.

Casier received uproarious applause and a standing ovation when the award for overall contributions to the community was presented.

"I came to Saranac Lake to build a new road, and I fell in love with the area," Casier remembered. "The road is still working, and so am I." Casier ended his speech thanking his "best friend for 58 years," his wife Audrey.

Casier was nominated for the award by members of the community, and the final selection was made by a panel of previous winners according to Sylvie Nelson, the chamber's executive director. Two new awards were added this year recognizing a Business of the Year as well as a Volunteer of the Year.

A fine example for Saranac Lake

Frank Casier was an excellent choice for Citizen of the Year by the Saranac Lake Area Chamber of Commerce. With Frank being such a smart entrepreneur, he offered his superior leadership in helping Saranac Lake become the great community it is today.

In this case, the Citizen of the Year award could also be considered a lifetime achievement award as we look back at how much Frank Casier contributed, in his words, "for the betterment of the community." He boosted Saranac Lake's economy long before state and federal grants were available by just rallying the community around the projects at hand.

Many remember him as the staunch advocate for citizens' property rights when the Adirondack Park Agency was newly formed in the early 1970s. It was a fight that was strong over the years, especially when it came to his Mount Pisgah housing development. Mr. Casier's leadership was propelled by his enthusiasm to get groups to envision the possibilities for Saranac Lake.

He saw a need for jobs, so he and a group of community leaders did what the Community Store is now doing and sold shares to buy a building to house a dress factory. It resulted in the creation of jobs, and investors got a return on their money.

In the late 1960s and early '70s, Mr. Casier's expertise as a developer arranged some land deals that removed old buildings blocking the view of Lake Flower when River Street was expanded, making a beautiful entrance into the town.

He also bought and rehabilitated old and abandoned homes around the village and put them back on the tax rolls as affordable housing.

More importantly, he was instrumental in working to establish North Country Community College in Saranac Lake. Mr. Casier served on the college's board of trustees as well as numerous other boards that were graced with his influence and intellect. He was the driving force rejuvenating the chamber of commerce after World War II, the Local Merchants Association and starting the Be Thankful You Can See campaign, along with many other accomplishments.

Saranac Lake is what it is today thanks to Frank Casier's legacy of developing a sustainable economy for the betterment of the community. Don't be surprised if he has more projects in store for the village.

On this Memorial Day, I would like to remember citizens and businesses that I have known in Saranac Lake over the past 60 years. They are gone but not forgotten. Names are listed in no particular order. Subject to errors or omissions. 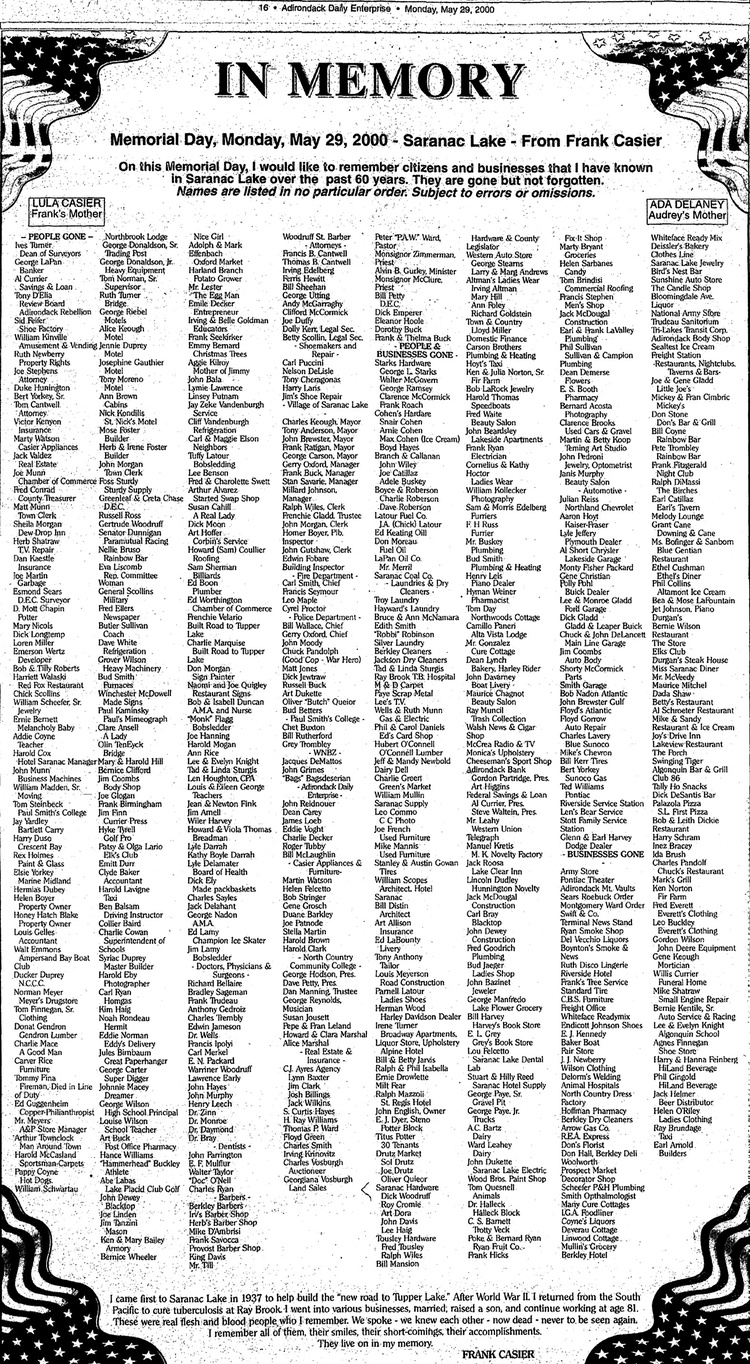 I came first to Saranac Lake in 1937 to help build the new road to Tupper Lake. After World War II, I returned from the South Pacific to cure tuberculosis at Ray Brook. I went into various businesses, married, raised a son, and continue working at age 81. These were real flesh and blood people who I remember. We spoke - we knew each other - now dead - never to be seen again.

I remember all of them, their smiles, their short-comings, their accomplishments.... They live on in my memory.