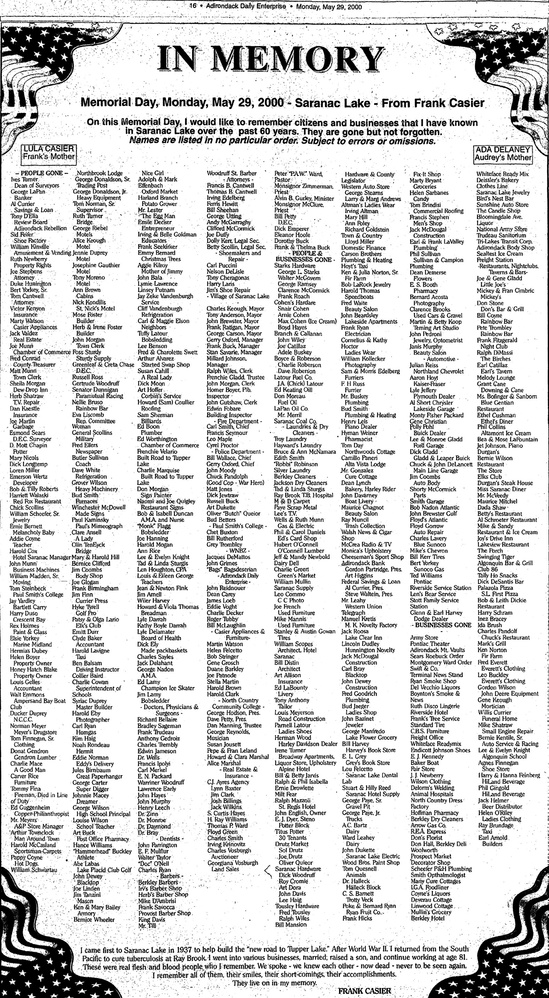 Casier is SL's Citizen of the Year

By WILL ABRUZZI Enterprise Staff Writer

SARANAC LAKE - Francis "Frank" Casier is the Saranac Lake Citizen of the Year.

The Saranac Lake Area Chamber of Commerce presented Casier with the award Wednesday night at its annual meeting and dinner, which was held at the Red Fox Restaurant.

Casier received uproarious applause and a standing ovation when the award for overall contributions to the community was presented.

"I came to Saranac Lake to build a new road, and I fell in love with the area," Casier remembered. "The road is still working, and so am I." Casier ended his speech thanking his "best friend for 58 years," his wife Audrey.

Casier was nominated for the award by members of the community, and the final selection was made by a panel of previous winners according to Sylvie Nelson, the chamber's executive director. Two new awards were added this year recognizing a Business of the Year as well as a Volunteer of the Year.

A fine example for Saranac Lake

Frank Casier was an excellent choice for Citizen of the Year by the Saranac Lake Area Chamber of Commerce. With Frank being such a smart entrepreneur, he offered his superior leadership in helping Saranac Lake become the great community it is today.

In this case, the Citizen of the Year award could also be considered a lifetime achievement award as we look back at how much Frank Casier contributed, in his words, "for the betterment of the community." He boosted Saranac Lake's economy long before state and federal grants were available by just rallying the community around the projects at hand.

Many remember him as the staunch advocate for citizens' property rights when the Adirondack Park Agency was newly formed in the early 1970s. It was a fight that was strong over the years, especially when it came to his Mount Pisgah housing development. Mr. Casier's leadership was propelled by his enthusiasm to get groups to envision the possibilities for Saranac Lake.

He saw a need for jobs, so he and a group of community leaders did what the Community Store is now doing and sold shares to buy a building to house a dress factory. It resulted in the creation of jobs, and investors got a return on their money.

In the late 1960s and early '70s, Mr. Casier's expertise as a developer arranged some land deals that removed old buildings blocking the view of Lake Flower when River Street was expanded, making a beautiful entrance into the town.

He also bought and rehabilitated old and abandoned homes around the village and put them back on the tax rolls as affordable housing.

More importantly, he was instrumental in working to establish North Country Community College in Saranac Lake. Mr. Casier served on the college's board of trustees as well as numerous other boards that were graced with his influence and intellect. He was the driving force rejuvenating the chamber of commerce after World War II, the Local Merchants Association and starting the Be Thankful You Can See campaign, along with many other accomplishments.

Saranac Lake is what it is today thanks to Frank Casier's legacy of developing a sustainable economy for the betterment of the community. Don't be surprised if he has more projects in store for the village.

On this Memorial Day, I would like to remember citizens and businesses that I have known in Saranac Lake over the past 60 years. They are gone but not forgotten. Names are listed in no particular order. Subject to errors or omissions.

I came first to Saranac Lake in 1937 to help build the new road to Tupper Lake. After World War II, I returned from the South Pacific to cure tuberculosis at Ray Brook. I went into various businesses, married, raised a son, and continue working at age 81. These were real flesh and blood people who I remember. We spoke - we knew each other - now dead - never to be seen again.

I remember all of them, their smiles, their short-comings, their accomplishments.... They live on in my memory.