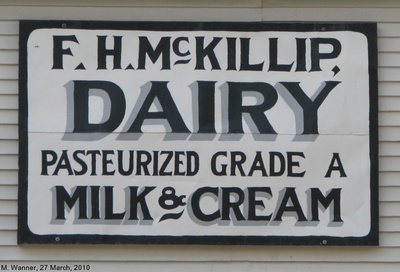 Francis Hubert McKillip was a World War I veteran, owned a taxi business, the F.H. McKillip Dairy, the Miss Saranac Diner, The Porch restaurant and a grocery store.

Mr. McKillip was born here on Jan. 21, 1898, the son of Mr. and Mrs. Ambrose McKillip. He attended Saranac Lake High School, the University of Vermont and was a veteran of World War I.

His first venture into business was a taxi service which was sold in 1928 when he started the F.H. McKillip Dairy on the Bloomingdale Road. He retired about six years ago but in the meantime had owned and operated several other businesses including the Miss Saranac Diner, The Porch Restaurant and a grocery on Lake Flower Avenue.

Survivors are his wife, the former Mary Agnes Newell; three sons, F. Hubert, Jr. and Joseph of Saranac Lake and Daniel of Peru and two daughters, Mrs. Elizabeth Cassese of Far Rockaway and Mary Agnes, at home. He also leaves a brother, Robert, of Saranac Lake, a sister, Kathryn of Jackson Heights and one grandchild, Kathryn Ann McKillip.

Mr. McKillip is reposing at the Keough and Son Funeral Home, where friends may call from 2 to 4 and 7 to 10 p.m. A Rosary Service will be held at the funeral home tomorrow evening at 8 o'clock and a Funeral Mass will be said at 10 a.m. on Saturday at St. Bernard's Church. Burial will be in St. Bernard's Cemetery.

Note: Francis Hubert McKillip, of the St. Armand section of Saranac Lake, is listed as Francis H. McKillip in the Essex County Honor Roll of those who served in the World War of 1918-19.