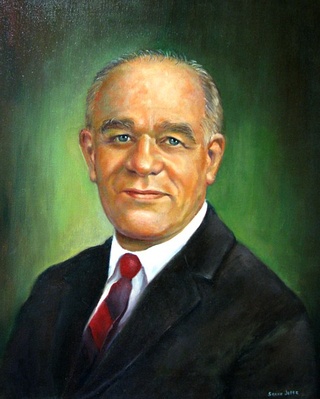 Married: Julia Schaffler of Budapest in 1942

He earned his doctoral degree in medicine from the Royal Pazmany Peter University Medical School in Budapest in 1928 and performed his residency with the University Hospitals of Budapest. He soon became an assistant professor in the ENT department there and authored eight papers in Hungarian and German. On staff at several hospitals in Budapest, Dr. Ipolyi was a professor and doctor of the College of Dramatic Art in Budapest. In this capacity, he served as the Doctor In The House for the Budapest Opera. Opera was a life-long love of his, and he had fond memories of going back stage before performances to check the singers' throats if they had any complaints.

He married Julia Schaffler in 1942 in Budapest. During World War II in 1944-45, Dr. Ipolyi was chief of the ENT Department of the 503 Red Cross Hospital. In 1945 after the fall of Hitler, he and his family left Hungary and lived in emigration in Austria. During their five-year stay in Austria, Dr. Ipolyi served as the doctor of the Austrian section of the Hungarian Federal Reserve Bank and chief of ENT and IRO Hospitals in Gmunden and Linz. He would travel to Linz each week from the mountain town where the family stayed in Austria. He did not want the family in the immigrant camps in Linz due to the many influenza outbreaks there. He would stay in a Linz hotel all week, and if there was a disease outbreak, the patients lined up outside his hotel room door, waiting their turn to have their tonsils removed to decrease their chance of disease.

Finally an opportunity arose to emigrate to the United States in 1950. Dr Ipolyi "took the job no American doctor wanted" (according to the UN refugee representative who arranged it) and became the physician for the tuberculosis sanatorium in Gabriels. TB was still a dangerous disease in those early days before the use of penicillin became commonplace. This gave him the chance to perform a five-year medical residency as required in the USA for all foreign-trained physicians despite decades of medical practice. The family lived in Gabriels until 1956.

Dr. Ipolyi was licensed by the New York State Medical Society in 1953 and began practicing part-time in Saranac Lake in 1954. He became a naturalized U.S. citizen in 1956, the same year that the family moved to Saranac Lake and bought the house known as "The Porcupine" at 147 Park Avenue from Frank Casier.

Dr. Ipolyi was an ear, nose and throat specialist throughout his medical career. In 1960, the first floor of the home was divided in half to make room for his medical office. Mrs. Ipolyi felt it would be wise to do so as there were many times that Dr. Ipolyi was called to the hospital in the night for an emergency, but then the patient, likely with a broken or bleeding nose, would not show up. The office in the house prevented lost sleep from such incidents. Dr. Ipolyi was on staff at Saranac Lake General Hospital, Lake Placid Memorial Hospital, and Mercy General Hospital in Tupper Lake. He served as a consultant at Alice Hyde Hospital in Malone, Will Rogers Memorial Hospital in Saranac Lake, Sunmount State School Department of Mental Hygiene, State Vocational Rehabilitation, State Bureau of Disability Determination, Ray Brook Rehabilitation Center, and the Uihlein Mercy Center in Lake Placid.

It was not easy for Dr. Ipolyi as an immigrant to establish himself in Saranac Lake. When he first applied for privileges at the Saranac Lake hospital, the medical staff voted him down. Then, his soon-to-become dearest friend, Dr. Joe Rosenstein, stood up and made an appeal to the medical staff to reconsider their decision. His appeal turned the situation around.

Dr. and Mrs. Ipolyi moved to Houston in 1977 to be closer to their children. He continued part-time medical practice until 1981 in Houston at St. Joseph's Hospital.

Julia Ipolyi preceded him in death in 1979. His youngest daughter, Barbara, was tragically killed by a drunk driver in 1960. In the last decade of his life, Dr. Ipolyi traveled yearly to Hungary to be with his brother Charles and other family members and friends who remained in Hungary after the war.

Dr. Francis X. Ipolyi's son, Dr. Peter Denis de Ipolyi, one-time resident of Saranac Lake, died on August 17, 2017, after a lengthy illness.   He had been a surgical oncologist in Houston, TX.  [ADE]  Dr. Francis X. Ipolyi's son, Ben de Ipolyi, died suddenly on March 4, 2018 in Weston, CT where he had lived with his family for many years.  He was a custom homebuilder.