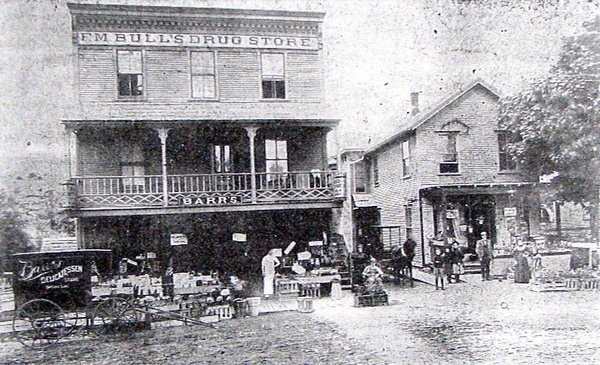 Francis M. Bull was a veteran of the Civil War. He enlisted in Westport as a private in the 77th New York Infantry Regiment, was mustered in on October 31, 1861, and promoted to corporal within six months. His regiment served in the defense of Washington, D.C., and then was part of the Peninsula Campaign in Virginia, fighting at Williamsburg and in the Seven Days' Battles. Corporal Bull was one of almost 36,000 Union and Confederate casualties suffered during this fighting. He was discharged from the army on July 19, 1862,  according to an article by Herbert C. Hallas in the Franklin Historical Review, Volume 50, 2015, titled, "The Namesakes for Franklin County's GAR Posts."

Returning to Ausable Forks, he became a veterinarian. In 1881, he started the first pharmacy in Saranac Lake, buying the George Washer house, now 18 Main Street, enlarging it, and turning the ground floor into a drug store. In 1887 he was supervisor of the Town of Harrietstown. In 1888 he sold a half interest in the business to Dr. Frank Kendall; the partnership lasted for three years. In 1891 it was dissolved, and Dr. Kendall opened a store of his own at 82 Main Street.

Bull was one of the original four Saranac Lake village trustees elected in 1892, but he died soon afterward. Post 621 of the Grand Army of the Republic, an organization for Civil War veterans from Saranac Lake and Lake Placid, was named the F. M. Bull post; it was active between 1910s.

Bull also organized the first telephone exchange in Saranac Lake. Alfred L. Donaldson identifies him as "J. M. Bull" in A History of the Adirondacks.

FIRST TELEPHONE EXCHANGE — The above scene would hardly be confused with the present-day conception of a telephone exchange, yet in 1887, F. M. Bull, owner of the Bull's Drug Store installed a primitive switchboard, got himself ten subscribers and operated the first telephone company in Saranac Lake. According to historians, the central call was always, "Hello, Bull!"

After Bull's death in 1893, the exchange was taken over by Joseph Merkle and Frank M. Jackson who moved it to 91 Main Street. In 1903 the two men sold the exchange which had grown with the times to the Hudson Telephone company in 1909.

When Bull died and his exchange was moved, Dr. Kendall, a veterinarian, who formerly worked with Bull, absorbed all the drug business at his store. The Bull building was taken over by a man named Barr who ran it successfully as a delicatessen for many years.

Today the building houses a knitting shop and novelty store. The fruit store which stands next to Bull's in the above photograph, was built as a post office but never served that purpose. Today it houses a branch of the Hoffman Sporting Goods company.

A telephone company has been formed at the enterprising village of Saranac Lake, named as above, for the purpose of affording telephonic communication between the numerous business centres and summer resorts of that region. The central office will be at the drug store of Mr. F. M. Bull, of Saranac Lake, and the circuit will embrace Paul Smith's, Bloomingdale, Lee's and Trudeau's Camps, Big Clear Pond, (Joe Baker's), Ehrick's, Martin's, Miner's, (the taxidermist), Alexander's, the Sanitarium, Lake Placid, and perhaps other points. The poles are all out and on the ground, and will be set as soon as the frost is out. Mr. Bull was in Plattsburgh this week, making arrangements for the materials, and it is expected that by the first of June the wire (some 25 miles) will be up and in operation.

We cannot give exact arrangements at Saranac Lake. In addition to the central office at the drug store, there will be an office at Spaulding's and Miller's stores.

Query: How long before the Adirondack circuit will be connected with Keeseville and Plattsburgh? A private line of the Rogers company connects Ausable Forks with Lower Jay; a line of Messrs. Prime continues it to Upper Jay, and Mr. Weston is about to continue it to Keene, and the Cascade House, (Edmunds Ponds,) only six or eight miles from Lake Placid. Perhaps some arrangement can be made with those private owners, and we presume the Northern New York Telephone Company can be induced to continue from Keeseville to the Forks. It would then only require to connect Cascade House with Lake Placid, and the circuit would be complete. Connection might also be made by running a line from Saranac to Paul Smith's via Chase's and Wardner's.