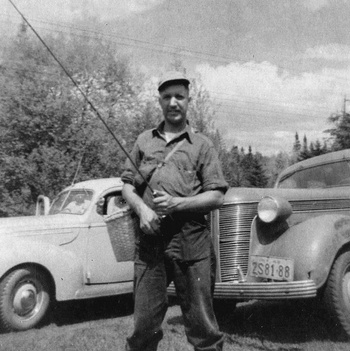 Francis L.  Roberts was a World War II Veteran and an Adirondack guide.

A lifelong resident of Loon Lake, Mr. Roberts was employed by the railroad, first working for New York Central and later for Conrail, for a total of 38 years until his retirement in 1977. Throughout his retirement he remained a true outdoorsman, as in his Adirondack guide days. A veteran of World War II, he served in the U.S. Army Company K, 291st Infantry. He served in several battles and campaigns including those in Central Europe, Naples Foggia, Rhineland, Rome Arno, and Southern France, and received several decorations including the World War II Victory Medal, a Good Conduct Medal and European, African and Middle Eastern service medals. He was a member of the VFW Post No. 125 in Plattsburgh.

He was predeceased by 11 brothers and sisters.

There will be no calling hours, at Mr. Roberts request. A Mass of Christian burial will be held at 11:15 a.m. Thursday at the Church of the Assumption in Gabriels, the Rev. Patrick Mundy officiating. Burial will be in St. Bernard's Cemetery. The Fortune-Keough Funeral Home in Saranac Lake is in charge of arrangements.

Memorial donations may be made to the Church of the Assumption in Gabriels in care of the funeral home.