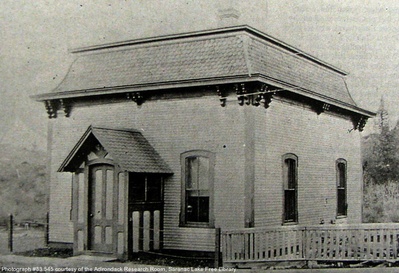 The Franklin County Library was built in 1880 on one twentieth of an acre on Main Street purchased from Milo B. Miller for twenty five dollars. It held four hundred books, purchased from a fund of seven hundred dollars. It grew out of a reading club formed by Dr. Edward L. Trudeau. It was the predecessor of the Saranac Lake Free Library. The building later became the Post Office Pharmacy.

At last ground has been broken for the library building. It is to be 20 by 26 feet — story and a half high — with reading room, &c., and will be finished in good style. It is situated on Main street, half way between the post-office and Rant Reynolds' house. Dr. Trudeau, the moving impulse of this institution, commenced to solicit subscriptions last summer, when he was at camp "Kenilworth," and soon received enough to carry his project into effect. We feel truly gratefully grateful to him for this philanthropic manifestation of his kind regards toward our little village, and feel perfectly safe in stating that our whole community echoes our sentiments. May his shadow never grow less. The "Hub" may boast of its manufactories of its great commercial houses, but for institutions of learning and literary advancement we claim to be the "Athens" of the Adirondacks.

Last Monday evening was the "opening" of the Library building, and was quite an important event in the history of this quiet little village. The main feature of the opening was the fair, under the auspices of the Ladies Helping Hand Society. And was well patronized by the "wealth, genius and beauty" of the town. The refreshments were superb, and were well served. The articles for sale were, taken together, very useful and tasty, and were quickly disposed of. We would say to the projectors of the scheme that it was a complete success, socially and financially, and reflects much credit upon them for the nice manner in which everyone was entertained. The net proceeds were $100. The Library is to be opened to the reading public on Monday the 7th. It will be open from 8 a.m. till 8 p.m. every day except Sunday, until further notice. Mr. Lewis has charge of it, and will make it pleasant for those who like to read.