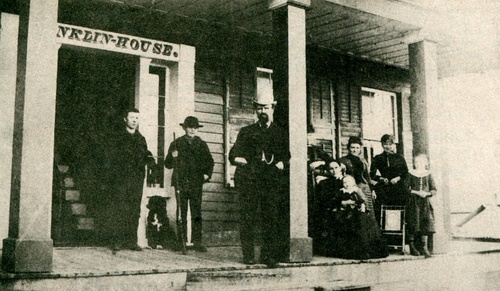 Adirondack Daily Enterprise, April 13, 1987 There were two hotels in Franklin County named the Franklin House, one in Saranac Lake, that later became the Grand Union Hotel, and the other in Franklin Falls.

The latter was built on the hill above the mill, adjacent to the road leading to Bloomingdale, not long after the disastrous forest fire of May, 1852.

The hotel at Franklin Falls—The Franklin House—built by Peter Comstock under Mr. Tremble's supervision, is the one that became famous as a half-way house in the old days of stages. Its career was decidedly checkered, and it frequently changed ownership, as the following table will show:

When Paul Smith became owner of the hotel and waterpower at Franklin Falls, he closed the old house to the public. A bit of sentiment was involved in the acquisition, for it was there that he was married in 1859, when the hotel was the finest one in the mountains. In 1912 he completed at the falls a handsome and costly hydro-electric station, of which he was very proud. One of the last pleasure-trips he ever took was to see the machinery of this new plant set in motion. He was then in his eighty-seventh year. He came in an automobile, traversing a road he had often traveled in the early days no faster than oxen could move, and he rested for the last time at the old hotel where he had been married fifty-three years before.

To show how lively this now deserted spot had once been, I quote a passage from Charles Hallock's "The Fishing Tourist," published in 1873. He is speaking of approaches to the Adirondacks, and after calling attention to the beauties of the "Wilmington Notch road, he says:

By the other route there is a romantic bit of scenery at the Franklin Falls of the Saranac; but its natural charms are disfigured by one of those utilitarian improvements, a saw-mill. Here is the "half-way house" where passengers for Smith's and Martin's dine. Two seasons ago (1871), while indulging in a post-prandial cigar, I took the trouble to count the names on the little hotel register, and found that they numbered fifteen hundred!—and the season was only half over.