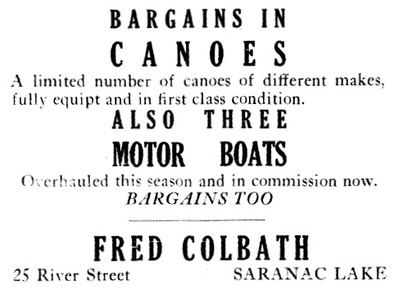 Born: 1871, a son of Hosea Colbath and Kate Welthy Reynolds

Fred Colbath was the operator of Fred Colbath's Boat Line in the mid-1920s on Lake Flower and Lower Saranac Lake. One of his boats was the passenger launch Ampersand. John Duquette says that he was one of the first to go into the tour boat business after the Saranac River locks opened. Colbath was also a Village Trustee in 1905-6 and 1912-13.

He is listed as one of ten merchants in Saranac Lake selling SOCONY gasoline (Standard Oil Company of New York) in a 1918 advertisement in the Lake Placid News.

A spectacular fire breaking out about five o'clock Monday afternoon totally destroyed the Curran garage on River street [apparently at 25 River Street] at Saranac Lake, a two-story building owned by Fred Colbath, who lived upstairs. A number of cars were burned. The loss will be upwards of $30,000. Workmen were using a drop light doing repair work, it is understood. The light slipped from the hands of the man holding it and the bulb broke. A short circuit resulted and gasoline on the floor was fired by the sparks. A sheet of flame spread across the garage floor, igniting cars. The workmen were helpless and had to run for their lives. The flames spread to gasoline tanks of the automobiles, which exploded with terrific force. Mr. and Mrs. Colbath, sitting, quietly upstairs, were forced to flee for their lives. Little of the furniture was saved. This is the third serious fire in Saranac Lake during the past fortnight.

The determination of the meaning of "low water mark" is the fundamental problem to be solved by the courts, according to Village Clerk Seaver A. Miller, in the legal contest pending between Captain E. E. Thomas and others on the shore front of Lake Flower in his vicinity. Mr. Miller is in possession of the original deeds conveying the property from Pliny Miller to John Jay Miller and from the latter to Arvilla Blood, sister of Orlando Blood. Pliny Miller, who was the first settler in this region after the Moodys, secured three hundred acres from John Thurman and others, who owned thousands of acres included in Great Tract No. 1 of Macomb's purchase. For a considerable time after the Legislature improved the frontage no taxes were paid on the land, which would seem to imply that it was public property. The question arises how any individual could transfer the public domain. The property was first assessed after Orlando Blood, who inherited 80 acres from his sister, left it to Wallace Murray. Low water mark was supposed to be the limit of the boundaries next to the stream or lake, of the eighty acres, but it has been constantly changing as the lake has been filled in. Fred Colbath is one of the chief persons involved in the dispute with Thomas. Mr. Colbath says he has his deed direct from Orlando Blood, while that of Captain Thomas came only a few weeks ago from Mr. Murray.

W. R. Vosburg, proprietor of the Riverside garage, has had surveyors of Village Engineer Merrill at work lately determining his lines. Captain Thomas has had engineer Fraleigh and Mr. Colbath has also had surveys made. A compromise on Captain Thomas' part or a pretty legal fight seem to be the alternatives.

Funeral services for the late Fred Colbath, who died at his cottage on the Ticonderoga-Baldwin road last week Wednesday, were conducted at Saranac Lake, his former home, Friday. Internment was in the Saranac Lake cemetery. Mr. Colbath was for many years a prominent business man of Saranac Lake and formerly village trustee. Mr. Colbath was about 60 years of age and a native of the Adirondacks. His father, the late Hosea Colbath, was famous as a guide and woodsman, and the younger Colbath grew up in the logging days of Adirondack streams, becoming are expert log driver. His business activities were centered around the rivers and lakes in the vicinity of Saranac Lake For many years he operated a boat livery on Lake Flower, from which point he ran an ex-? boat line through a part of the Saranac chain. He became heavily interested in Saranac Lake property and had extensive holdings in various parts of the village, most of which he had sold since his retirement from active business life about ? years ago. Mr. Colbath came to Ticonderoga about two years ago, at which time he bought the D? cottage a short distance from .....the rest illegible