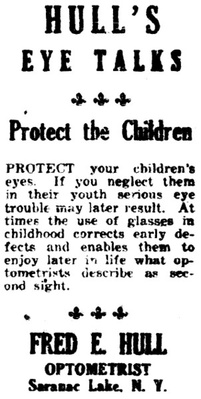 Fred E. Hull operated a jewelry store at 22 Broadway prior to about 1920 when it was bought by Matthew M. Munn in partnership with Ernest Lamy. It was subsequently sold to William G. Scheefer. 1

John Tully, formerly of Malone, has sold his Dry Dock Market building at Saranac Lake to Fred. E. Hull, who will open up a jewelry store. Mr. Tully is undecided what business he will engage in next.

Justice Spencer at a special term of the Supreme Court, held in Saratoga on Saturday, granted a divorce to the plaintiff in the case of Fred E. Hull against Lucille C. Hull, both of Saranac Lake.

Fred E. Hull, the well known and popular jeweler of Saranac Lake, was united in marriage on Monday, June 26, 1911, to Caroline Hinkley Garfield, also of Saranac Lake. The wedding ceremony was performed by Rev. F. F. Love, at the home of the bride on Lake street. The happy couple have gone to New York and other places on an extended wedding trip.