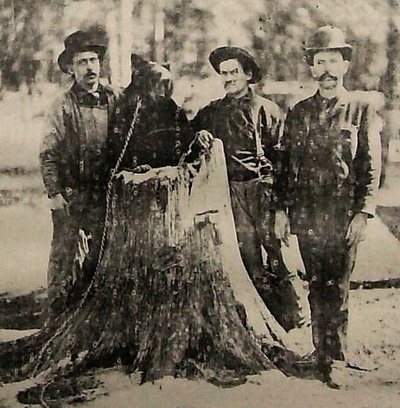 Frederick E. Martin, Sr. was one of the guides photographed by A. W. Durkee at Paul Smith's boathouse on August 8, 1884.  According to Geraldine Collins, he was a brother of Lydia Martin, Paul's wife.  He settled on his farm in Gabriels in 1893.  His son, Douglas, took over the farm in 1927. 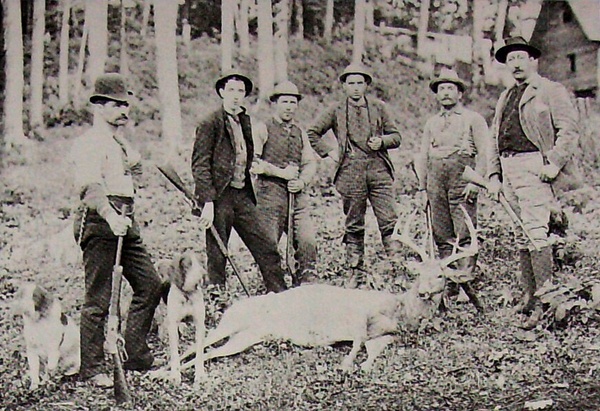 Fred Martin, Mrs. Paul Smith's brother and one of the most splendid, sturdy specimens of manhood I have ever seen, was about to give my hand a squeeze that would, no doubt, have finished me, when I whispered to him I was sick and wanted to he carried up to my room. He picked me up as if I had been an infant, and went up two flights of stairs, two steps at a time, opened the door of a room I had occupied before, and put me down an the bed with a pained expression and the comforting remark, "Why. Doctor, you don't weigh no more than a dried lamb-skin!"

We both laughed, and indeed I was so happy at reaching my destination and seeing the beautiful lake again, the mountains and the forest all around me, that I could hardly have been depressed by anything Fred Martin could have said.

From Footprints on Adirondack Trails by Charles Wardner

...Another evening the trend of the stories around the camp fire drifted to the subject of horrible and terrifying noises. Ed Derby told about the hair raising and blood curdling yell of the panther as it gives up a hunt. Sim Washburn told about his trip out west and hearing the yell of Indians on the war path. When it came Fred Martin's turn he said the worst:noise he ever heard was his wife scraping the bottom of the flour barrel.

"Fred Martin" by Pat and Tom Willis.
Brighton History Days have been held one weekend each summer since 1994, sponsored by the Brighton Architectural Heritage Committee.