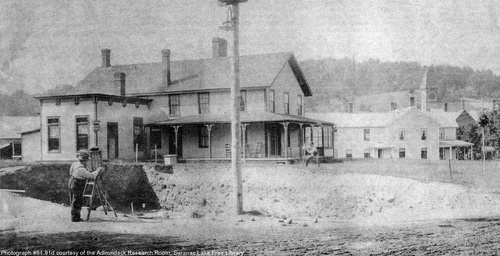 Married: Laura Haynes of Plattsburgh in 1885

Children: Three children, including Helen, for whom Helen Street is named

Frederick Asher Isham was senior partner in New York law firm Isham and Isham, and lived in New York City and Lake Placid; he was the son of H. L. Isham. 2 With the Blood family, he bought 21 acres of sheep pasture between Church Street and Pine Street and developed it, laying out 88 "Villa sites" on his eleven acres, along with the streets of Helen Hill. Fred Isham named Helen Street for his daughter, Helen Isham.

He was one of the original four Saranac Lake village trustees elected in 1892. With Milo B. Miller, he campaigned for the incorporation of the village of Saranac Lake, and in 1892, the first village board meeting was held in his office; he was named village clerk. 3

No name is more intimately associated with Saranac Lake than that of Frederick A. Isham, attorney, and present counsel of the village. Mr. Isham came here when the town was in its infancy, and he has been foremost among the energetic ones who pushed forward enterprises for the welfare of the town, assisting greatly in bringing this beautiful mountain village to the place of its present occupancy among the villages and cities of the State.

Frederick A. Isham was born in Plattsburgh, N.Y., on May 22, 1860. He attended schools in that vicinity and, after graduating from Plattsburgh Academy, went to Columbia Law School, New York, from which institution he graduated with the degree of L.L.D. in 1883. He was then in the buoyant flush of youth and, having been admitted to the bar in Jan. 1884, began the practice of his profession in New York. There he became very successful and he had the promise of a still brighter future when ill health compelled him to leave the city in 1889.

Mr. Isham arrived in Saranac Lake in June, 1889. The population was then [. . .t] 200, yet Mr. Isham, believing that the place was destined to grow and flourish, at once invested heavily in real estate and decided to remain here permanently.

Mr. Isham was married in 1885 to Miss Laura Haynes, of Plattsburgh, a daughter of one of the best known men of that town. Three bright children bless the union.

A rare photograph and a bit of Centennial history combine to afford us a glimpse of a rather unusual episode of local interest. The sequence begins with a parcel of Main Street property, a residential business office and the owner's role in the establishment of our village. Enter a picture-taker and the proprietor of a nearby hotel, who jointly conspired to produce the illustration which accompanies this article, and the drama unfolds.

A survey is in progress which is apparently locating the site for the new high school scheduled for 1890. The residence is the home of Frederick A. Isham with the square block addition serving as his law and real estate office. Isham, together with Milo B. Miller, was pressing for the community's becoming an incorporated village. Area growth in both population and additional buildings was creating an expansion that called for reliable municipal services and some sort of civil administration.

Hundreds of health seekers were arriving and resort hotels were springing up as sportsmen favored our area. Support merchants multiplied in accordance and it became obvious that such prosperity would necessitate a valid preparation just to keep pace. Isham, Miller and other concerned community leaders deemed it feasible to proceed with the incorporation plan. Seeking approval from the public in general, a special election was arranged to be held in early May with the results being currently celebrated during this our Centennial year. Officers elected were: Dr. E.L. Trudeau, president, Milo B. Miller, Francis M. Bull, and Dr. Charles F. Wicker, trustees; Frederick A. Isham, clerk. With the first village board, established steps were taken to appoint commissioners of the various departments and establish a set of laws to govern the community.

The first board meeting was held in Isham's office on June 16th, 1892, with Tuffield Latour being named street commissioner while W. J. Slater, Dr. C. F. Wicker, and Dr. J. C. Russell were appointed to the board of health. Subsequent meetings announced that tax collections would be forthcoming and William E. Roberts was named to the post of police constable. On July 13, a street survey and mapping project was authorized at a fixed amount of nine dollars per day. On Aug. 6 the board recommended the formation of a water commission and by Nov. 2nd, a constructor was set to work on a water and sewer project. On May 5, 1893 Dr. Trudeau retired and was replaced by Milo B. Miller and on Nov. 17th E.E. Lobdell was appointed to act as night watchman.

On June 23rd, 1894, Steve Merchant had to appear before the board in answer to a complaint that one of his lumber stacks was blocking the road next to the Main Street Bridge. Steve owned and operated the former Pliny Miller sawmill where the Saranac Lake Village office building is presently located. He agreed to move the lumber. Moving on to 1895 a new street was approved that would run from Broadway to "Trestle Street" and was to be named Woodruff Street (Trestle Street later became Bloomingdale Avenue and the former name reflected the narrow gauge railroad timber trestle that ran from Union Station to Pine Street) The railroad was the Chateaugay, which reached Saranac Lake from Plattsburgh in 1887 and was extended to Lake Placid six years later On January 22nd, the firm of Jackson and Merkel was granted a franchise to operate a telephone system in the village for a term of five years.

And so it went, step by step the emerging village was testing its wings in the civil realm. The many complicated functions related to municipal management were met and mastered by our village fathers, although they possessed little or no previous experience in such matters. It was our good fortune to have had personnel of that caliber during those developing years. Business also seemed to prosper with the native enterprise and the ability to adapt to both the health and recreation industries. Local entrepreneurs as well as some of the visiting gentry erected substantial buildings along Main Street and Broadway as the village took shape.

That pretty much takes care of the historical aspects... so where's the humor?

Returning to the subject of the photograph, Isham's house and office were moved to what is now Academy Street to make way for the new Main Street High School. It was in this new location that the early board meetings were held as the school was built in 1890. By 1906 Isham had moved to Lake Placid and years later the wing that held his office was occupied by A. B. Hokanson as a tailor shop. The photo, which was taken by George Baldwin in 1888, contains the humorous part of our story. What is purported to be a bona fide survey in progress is actually a burlesque. The "surveyor's" transit is an empty beer case mounted on a stepladder and the sighting scope, which is mounted on the beer case, is nothing more than an empty whiskey bottle. His assistant, near the porch, is holding a sapling pole to represent a level rod. The surveyor at the transit happened to be R A. Streeter who, at that time, was the owner of the. Berkeley Hotel across the street and his assistant, the rod man, was J. H. Wilson, who was the bartender at the Berkeley, It had to be either Baldwin or Streeter who instigated this prank but, in any case, it was a superb bit of deception!

To the right of Isham's house is the McKee building and above its roofline the tower of the old Town Hall can be seen. In 1888 it had just been completed and the town clock had not as yet been installed (note the blank circles). The large boulder at the right has appeared in many of the early village photos but was removed for the construction of Academy Street. Seaver Miller and Judge Utting both claimed that, as children, they played on the rock. If you happen to have a copy of the Centennial Booklet you can find this same boulder on Page 10, "A Barren Main St.," and again on Page 15 "President Harrison dedicates new high school" Apparently it was a rock with a good press agent.

At some period of time between Isham and Hokanson the main portion of the former residence was separated from the smaller office and quite possibly remains, although somewhat altered, at No. 7 Academy Street. A second story was added to the little office building but, oddly, the roofline decorative frieze remained in place. For a brief time the building served as a telephone office. Today, as the Decorator Shop, 4 it is sandwiched between two driveways at No. 5 Academy Street across from the Hotel Saranac. It has been slightly altered and a concrete block addition has been added in the rear but nothing can detract from that history was made here 100 years ago. Four years earlier Baldwin and Streeter had joined forces on Main St. to prove that even such an important page in local history can have its comic section appropriately entitled "Of History and Humor."