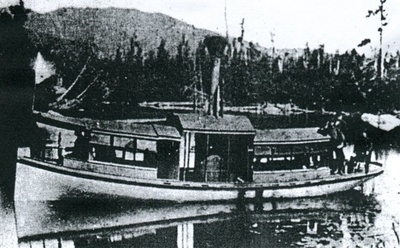 Children: Fred M. Rice, Anne Rice Jacobsen. According to a family photo at the Adirondack Experience, there were 10 children: Fred M., Jennie F., Erna S., Hattie K., George B., Lizzie, Fannie, Herman F. (the youngest), Matilda B. (Tillie), and William A. (Will).

Frederick W. Rice was born in Hartford, Connecticut, the son of Caleb and Jane E. Rice. He had been a boat builder in both Burlington, Vermont and Essex, New York, where he had also worked for the Delaware and Hudson Railway, and where he had met and married Harriet "Kitty" Todd, in 1872.

He came came to Saranac Lake in 1876 in a mule-drawn buckboard, on top of which rested a sailboat. Rice was adept at photography, and his studio was above his boat shop, on what was then known as Rice's Point, now The Birches, on Lower Saranac Lake.

He bought property on Lower Saranac Lake from Jabez Alexander in 1893, and from Milo B. Miller in 1886. He built a house, some rental cottages, and a two-story boathouse that housed the shop in which he built guideboats, and his photographic studio and gallery. He also built a cabin near the lake shore for his teenage boys, according to Eleanor Rice Stearns— Fred and Kitty had eleven children. His home and the shore cabin still exist.

He became well known for his guideboats, and he sold photographs and did photo finishing for tourists. With William A. Martin, he built the Water Lily, launched in 1876, the first steam-powered boat on Lower Saranac Lake; it made regular runs up to Bartlett's Hotel. He is best known for his scenic views of the Saranac Lake area, and for his portraits, especially his photographs of his then-neighbor, the noted author Mark Twain.

Fred Rice was the nephew of William Marsh Rice, founder of Rice University, who was murdered in one of the more sensational crimes of the early 1900s. Subsequently, ads were placed in major newspapers searching for heirs; John Harding, the owner of the Algonquin Hotel, showed the ad to Fred, who sold his inherited property to his cousin, Frank McKee, another heir.

Fred W. Rice moved to Mercer Island, Washington; later, his wife Kitty and some of the children returned to live in Saranac Lake. His oldest child, Fred M. Rice, stayed and worked as a guideboat builder and guide; he is best known as the guide and friend to Martha Reben, who wrote three books about her experiences camping on Weller Pond while recovering from tuberculosis.