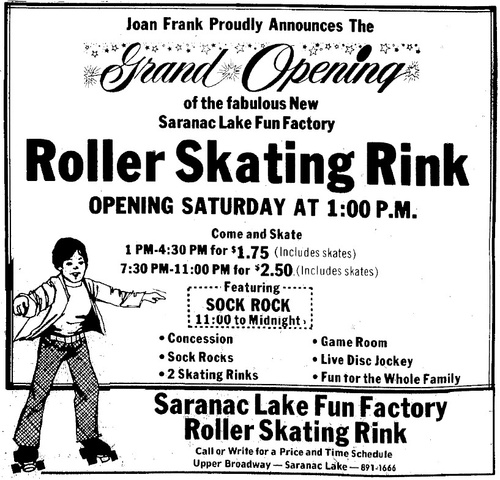 Adirondack Daily Enterprise, March 23, 1977The Fun Factory was a roller skating rink that was created by Joan Frank in a building that had housed the Saranac Lake Dress Factory.

SARANAC LAKE - If all goes well, Saranac Lakers will be enjoying indoor roller-skating early this February!

The S. Curtis Hayes Real Estate Agency, Inc. announced this morning that sale of the Bea-Jay Manufacturing building at 204 Broadway has taken place, with Joan Frank assuming ownership of the former dress factory.

Contacted by telephone this morning, Ms. Frank told the Enterprise that she has taken over the building under the name of The Saranac Lake Fun Factory, Inc., and construction is slated to start almost immediately to convert the facility into a full-scale indoor roller-skating rink.

Ms. Frank said that her present plans are to have a main rink, 58 by 125 feet, located in the center of the building. The main rink will have lines painted on it making it adaptable to indoor tennis.

There also will be a second, small rink, 19 by 40 feet, for beginning skaters.

Other features in the construction plans include a large game area with pinball machines, and several food and soda machines located throughout the building. In the future, Ms. Frank said she hopes to be able to install and operate a full-time concession stand in the building.

Special attractions at the facility will include a complete roller skate rental center. Ms. Frank said that initially there will be 200 pairs of skates available to persons needing them. In addition, she said she hopes to be able to stage special events at the facility like sock hops, or any other stagings appropriate to the building's layout and capabilities.

Ms. Frank said that a special construction company from Texas has been contracted to build the skating areas, and as of a phone conversation yesterday, the company is planning to begin Jan. 15. If all goes according to schedule, Ms. Frank hopes to open for business on the weekend of Feb. 5.

Ms. Frank served as the managing director of the Lake Placid Center for Music, Drama and Art for several years from its founding until recently, and has been a resident of Saranac Lake for many years.

SARANAC LAKE - Sunday, May 15, has been chosen as the date of the First Annual Skate-a-thon for Winter Carnival.

In cooperation with Joan Frank owner of the Fun Factory, the 81st Winter Carnival Committee has arranged the Skate-a-thon as the first fund-raiser for Carnival 1978.

WE DID IT! Weary bodies and tired feet did not deter 56 skaters from completing, the entire twelve hours of the First Annual Skate-A-Thon for Winter Carnival. A total of 107 skaters, who started noon yesterday at the Saranac Lake Fun Factory, received encouragement along the way from fans and sponsors alike.
Although a complete financial total is unavailable at the present time, it is estimated the marathon skaters raised ap- proximately four thousand dollars. Skaters will be collecting from their sponsors this week and the monies will be turned in Saturday from 10 a.m. -2 p.m. at the Harrietstown Town Hall.
Adirondack Daily Enterprise, May 16, 1977
The Fun Factory will be open for 12 consecutive hours on that day. Each skater will solicit sponsors who will pledge money per hour of skating time.

Five minute breaks each hour will be allowed. Snacks will be available for skaters, but a bag lunch is suggested. A maximum of 228 skaters will be allowed on the rink at one time. To be guaranteed skating room, each skater is encouraged to pre-register May 7 between 10 and 4 p.m. at the Harrietstown Town Hall. Skaters may register after that date, but only the first 228 will be guaranteed time.

The chairmen of the event are Walter Duffy, Jr. and Ray Dora. Patricia Murphy and Ms. Frank are rendering special assistance to the Carnival Committee.

Jones is a resident of Charlottesville, Va., and Lake Placid.

The $67,500 mortgage given by the Saranac Lake Fun Factory, Inc. to the Bank of Lake Placid was recently paid off.

The deed for the sale of the local property was signed by Joan Frank as president of Fun Factory corporation. Specifically included in the sale are the wood stoves, the figure skating flooring, carpets, drapes, and theater seats.

Not included in the sale are 250 pairs of roller skates, popcorn, machine, freezer, refrigerator, tables and stools, sound system, speakers and amplifiers; and electronic games.

SARANAC LAKE - Fun Factory, Inc. owner Joan Frank has said the recent sale of her roller skating rink has been misinterpreted by many toN mean no more roller skating at the site. She wants her customers to know she is still in business.

Frank explained that the property of the Fun Factory roller skating rink had been sold, as was reported, but that many of her customers thought the actual business had been sold. .

Nettie Marie Jones did buy the property and the building, "but I own the business," Frank said. She said she leases, the building from Jones to carry on her business.

"I would never have made the deal if I couldn't have leased it back," she said.

Many of her customers interpreted news of the sale to mean the rink would not be open again.

"Someone even came in and asked for a job running the rink for Mrs. Jones," Frank said.

Frank said business has still been held afloat with the same regular skaters." She said she has offered specials, but cannot seem to attract new participants.

The rink, she said, is plagued with rumors of drug use. She said she had four incidents of marijuana use in the first month she was open. All were taken care of by Frank or the local police, and she said after the last one she made an announcement telling the skaters she would not tolerate it.

"I've never had one more problem with it since," she said, after being open almost six years.

Frank has a Christian Skating Night on Mondays, and is also open Wednesday evening, Friday evening, and Saturday and Sunday afternoons.

Friday night, she said, is the night when the skaters really have fun and let out the frustrations of the week. "You're looking at enough energy to light up this town if you could bottle it," Frank said of her Friday night skaters.

Many parents, she said, probably think its unruly on a night like this. However, Frank said that's because they don't stay long enough to see just what the children are doing — releasing energy.

"They're just having fun," she said. "I would not run a bad place for kids."

There are 11 skate guards who work at the Fun Factory and help Frank monitor the roller skaters. Roller skaters aren't the only people in the area familiar with Frank.

She is well-known as a director with the Town Hall Players and its Half-Pint Players for very young actors. She is also a former director of the Center for Music, Drama, and Art in Lake Placid.