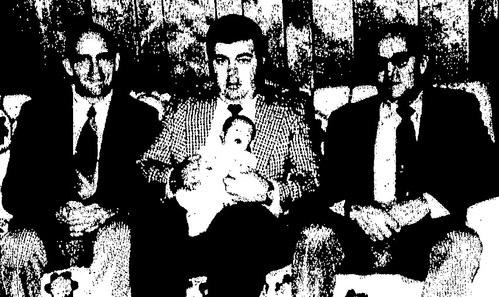 George A. Donaldson, Sr. operated the George A. Donaldson Construction Company and the Trading Post, a general store with cabins and campsites near Fish Creek. Donaldson's Campsite is a 700-acre parcel west of the narrows and east of New York Route 30.

In the early 1930s, Donaldson was hired by John R. Dunlap to work on Markham Point in northern Upper Saranac Lake. In A Mountain View, author Lewis Spence, Dunlap's grandson, describes Donaldson as the strongest man he had ever seen. He worked on Dunlap's woods with a small crew, felling trees with axes and crosscut saws, and later building the first road to the point, three miles through virgin forest to Forest Home Road.

SARANAC LAKE— George A. Donaldson, Sr., 79, of Lake Clear died yesterday at the General Hospital of Saranac Lake. He was born Sept. 8, 1904, in Lake Clear, the son of Charles and Cora (Pearson) Donaldson.

Mr. Donaldson has owned and operated the George A. Donaldson, Inc., Construction Company in Lake Clear since 1929. In 1948, he founded, the Trading Post in Lake Clear, a general store with cabins and campsites.

The funeral service will be held Thursday at 11 a.m., at the Lake Clear Presbyterian Church with the Rev. Connie Dorn, pastor, officiating. Burial will be in St. John's Cemetery in Paul Smiths.

Memorial donations may be made to Whiteface Mountain Lodge, 1 Olive St., Saranac Lake.