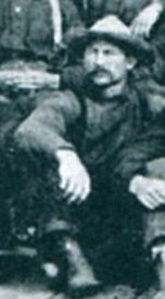 George Monroe Martin was a farmer, a Civil War veteran who served in Co. C 118th Regiment N. Y. V., and a guide. Together with Warren Flanders, he guided a party consisting of Dr. E. L. Trudeau and Lou Livingston. George Martin was one of the guides photographed by A. W. Durkee at Paul Smith's boathouse on October 2, 1885.

His farm was located a mile northeast of Bloomingdale at the intersection of Fletcher Farm Road and Campton Road.

George M. Martin, of Bloomingdale, and Henry McNulty, of Saranac Lake, have recently been granted pensions of $8.00 per month.