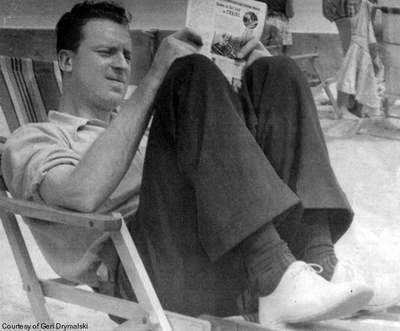 Dr. George Washington Drymalski was a patient at Trudeau Sanatorium from July 1941 to October 1943. A resident of Chicago, Illinois, at the time of entry he was 26 years old and a medical student at Northwestern University, Evanston, Illinois. After leaving Trudeau, he resumed his medical residency and became a radiologist. He married Cecil Jordan in February of 1945. They eventually settled in a northwest suburb of Chicago, (Northbrook), which was then very rural. They had nine children, eight of whom grew up, and seven of whom are still living.

Dr. Drymalski suffered a relapse of TB in the 1950s when he and Cecil had 3 or 4 children. He was quarantined at Cook County Hospital and had a lung collapsed or removed entirely. He worked at Resurrection Hospital for most of his medical career, until he retired in the 1980s. He died peacefully in his sleep, perhaps of heart failure, in February, 1998, just a few weeks short of his 83rd birthday. He rarely talked about Saranac Lake or Trudeau, but wrote letters during his stay there. It is clear that he was changed by his experience at Trudeau, being transformed from a city boy to a country gentleman; he loved being outdoors, especially in the North Woods of Wisconsin where he and his family frequently vacationed and fished. He also read x rays, pro bono, for the TB society in Chicago. He left all his children with an appreciation and love of the outdoors, a love of reading and of handcrafts, such as woodworking.