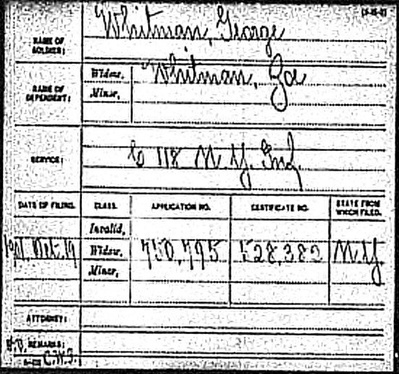 George Whitman was a farmer, a contractor, a guide and Civil War veteran.

According to his daughter (Sarah) Ellen (Whitman) Otis (December 4, 1851 -1925), the wife of Sidney Edwin Otis, George was a pioneer guide of the "North Woods." The family came from Clintonville when Sarah Ellen was a young girl.

In September 1870, George Whitman was one of three delegates from Harrietstown to the Republican County Convention.

The 1875 N. Y. Census the family was in Harrietstown; with them was James A. Latour (grandson) and Ida Owen (sister) born in Essex County

Mr. Whitman was one of the best farmers in Saranac Lake and was at one time the only contractor, and he built roads throughout the Adirondacks that are now one of the things which will remind the people that George Whitman was one of the early pioneers of the forest. He had always been a hard worker and had accumulated considerable property at the time of his death. His wife and five children, Mrs. S. E. Otis, Mrs. -Emily Morrow, Mrs. Hattie Martin, Gilbert G. and Alvin S. Whitman, survive.