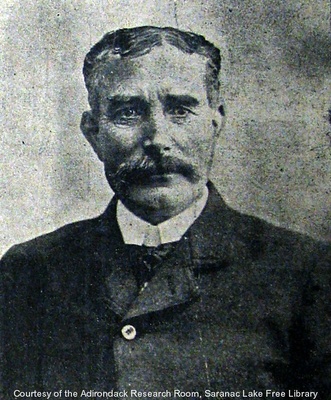 George E. Williams, a son of George Williams, was a mason and a politician, serving as Harrietstown highway and street commisioner.

The sanitarium is approaching completion. A competent corps of workmen, under the supervision of Mr. WRIGHT, is pushing on the work as rapidly as possible. GEO. WILLIAMS, jr., does the mason work, as he always does his work, in first-class style.

A fair was held last week at the camp of A. P. STOKES, on Birch Island, St. Regis, to raise money to complete the work on the sanitarium. Time is too limited to give the full title of the buildings. The fair proved a great success, and one thousand dollars was raised for the good cause.

Everything taken into consideration the result in Harrietstown is most gratifying, and speaks loudly in praise of the admirable management of Mr. Geo. Williams, the Harrietstown member of the county committee. Mr. Williams has always been known in this region as a hustler and vote getter of the first order, but his efforts this year are even of a more gratifying nature and of course he is proud of the result. Instead of being backward this year and without interest in the issue, Republicans of this town were urgent and untiring. The campaign was hot from its inception, and local Democrats were frightened by the zeal and energy exhibited by Mr. Williams and his corps of willing and hustling assistants.

The contract for building the macadamized road in the town of Brighton has been awarded to Geo. Williams, of Saranac Lake, and he will commence work at once. The road will be about six miles long and the price to be paid is $4,000. When this contract is completed Brighton will undoubtedly have the best roads of any town in the county.

George Williams died this morning at 7 o'clock in the Royal Victoria Hospital, Montreal, following an operation for the removal of a tumor two weeks ago. His wife and children, notified Sunday that Mr. Williams was steadily sinking, were all at the hospital when death occurred.

Probably no resident of this community was better known to other residents than George Williams. As a public citizen he was for twenty years an almost continuous office holder in either Saranac Lake Village or the Town of Harrietstown. He was a staunch Republican in politics and at one time was one of the party leaders in Harrietstown, being county committeeman from Harrietstown.

Mr. Williams twenty years ago was elected town highway commissioner. Later he was chosen town tax collector, and later still he was a candidate for supervisor on the Republican ticket, but was defeated. He was elected village street commissioner, which office he held for nine consecutive years. It was under his supervision that the first macadam pavements in Saranac Lake were laid. At the village election three years ago he was defeated for street commissioner for the first time, and since then he has not held office.

George Williams was born in the Town of Moriah, Essex County, on March 23, 1852. He was the son of George and Susan Wilcox Williams. It was 45 years ago that the family moved to Saranac Lake, coming here from Keene. They lived near Colby Lake until the death of George Williams, Sr., when George Williams, Jr., became head of the family and moved into the village. The family resided at their present home, 29 Lake Street for about twenty years.

It was about forty years ago that Mr. Williams married Miss Rosanna Kelley, daughter of Mr. and Mrs. James H. Kelley. Four children were born to the couple, Alzada, Adelaide, Fred and Etta, the latter dying in infancy. The wife and three children survive. One sister, Mrs. Anna Kennedy, wife of Asa Kennedy of Lake Placid, also survives, together with several nieces and nephews.

As a husband and father George Williams was a model man. His responsibilities did not cease with the members of his immediate family and he cheerfully bore other burdens that endeared him to everyone who knew the circumstances. In his relations with his fellowmen he was kindly and honest, as his long popularity with electors of Harrietstown and Saranac Lake shows. His family has the sympathy of hundreds of townspeople in their loss.

George E. Williams and his wife are buried together in Pine Ridge Cemetery; her name is given as Roanna R. Williams (1853-1915), and noted "His wife" (George's).